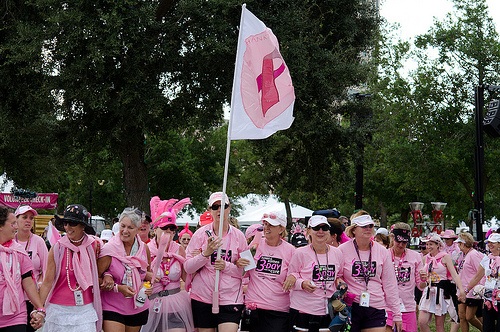 The Susan G. Komen foundation canceled its signature 3-Day walk in seven metro areas for 2014—a full half of the cities involved—as participation in its fundraising events continues to drop.

Komen states that the decision “was not made lightly, as this bold and empowering event has touched the lives of thousands of participants,” but proving that denial is not just a river in Egypt, Komen spokeswoman Andrea Rader suggested that the decision was influenced by economic uncertainty and competition from other charities. The statement read, “Many participants have reported that enthusiasm for the series remains very high, but it is more difficult for people to donate at levels they had in the past…We hope to one day return to a larger number of markets, but believe strongly that this adjustment will allow us to return the greatest amount of dollars to the cause at this time.”

The walks were dropped in Boston, Chicago, Cleveland, the Tampa Bay area, Arizona, the District of Columbia, and San Francisco.

This article in the Washington Post points out that no cities have been dropped from next year’s Avon Walk for Breast Cancer. A spokeswoman said that their numbers are on par with last year.

Komen has tapped its reserves recently to fund research and make grants, and some report that affiliates are expressing concern. But Andrea Rader seems blasé. “I don’t think anybody was particularly upset,” she said. “We have fairly substantial reserves and we had to tap them to help with our mission.”—Ruth McCambridge