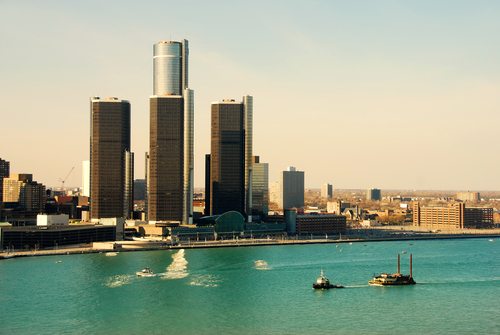 Louis Aguilar of the Detroit News marches through the recent history of various revival plans for the Detroit riverfront area, including Mayor Dennis Archer’s plan for casinos and an entertainment district and Mayor Kwame Kilpatrick’s notion of million-dollar riverfront penthouses. To say that the panoply of plans failed to materialize is an understatement. Nonetheless, major city planners are fixated on riverfront or waterfront development ideas, sparked by the models of Baltimore’s Inner Harbor and New York City’s South Street Seaport, just to name two high profile ventures (both, interestingly, developed initially by the Rouse Company founded by developer Jim Rouse, who also founded the widely admired Enterprise Foundation, now called Enterprise Community Partners).

Riverfronts never die, and their attractiveness to planers as boons to urban redevelopment never fades away either. In Detroit, it’s back again, with plans for upscale development. Past plans may have failed, but the city did what urban renewal typically does, which is acquire and assemble properties. Creditors in the Detroit bankruptcy plan are apparently eyeing some of the waterfront properties as compensation. For example, the Financial Guaranty Insurance Co., a bond insurer, has designed a deal in which it will receive ownership of the property currently occupied by Joe Louis Arena, which FGIC would replace with a hotel and riverfront condominiums. Detroit’s riverfront development strategy, even if it means turning over parts to creditors, is a downtown development strategy, as the riverfront abuts downtown along Jefferson Avenue from the Arena up past the Renaissance Center area where GM moved its headquarters and further heading northeast.

This downtown-focused riverfront development strategy, consistent with the efforts of downtown-oriented developers like Dan Gilbert of Quicken Loans, was interestingly countered recently by an announcement from the Kresge Foundation of a $5 million grant initiative over three years to provide grants ranging between $50,000 and $150,000 for as many as 10 projects that would be completed within 18 months. The first tranche of grants, for a total of $1.5 million, will be announced in March based on proposals to be submitted by December 2nd.

“We want to expand our pool of nonprofit partners, particularly those working at the grass roots, by recognizing and amplifying that energy and enthusiasm,” said Rip Rapson, the president and CEO of Kresge. “We want to help light up the map of Detroit quickly with the reality of positive change.”

The term of art used in the Kresge press release is “shovel-ready,” though the foundation will also make available additional smaller planning grants to groups with “promising ideas.” With all of the action occurring downtown—and, if creditors like FGIC get their way, on the riverfront, the attention to the Kresge grant will be on implementation, the evidence of concrete changes in the neighborhoods. Key elements of the grant guidelines issued by Kresge include the following:

Presumably, riverfront development projects would not be likely applicants for the Kresge grants. One might hope that these Kresge grants, hopefully to be emulated by similar initiatives from other Detroit-area foundations, would remind some city leaders that a downtown-centric revitalization of Detroit is only part of the long term answer to Detroit’s woes at best and risks following in the faulty footsteps of the riverfront plans of Archer, Kilpatrick, and mayors and civic leaders preceding and following them.—Rick Cohen

Disclosure: The Kresge Foundation is a foundation funder of the Nonprofit Quarterly.