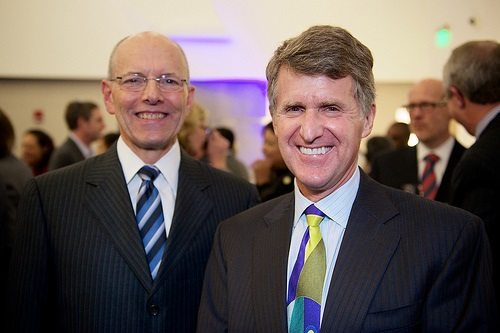 The trial concerning the fate of the Detroit bankruptcy plan is in its fifth week, with a parade of witnesses testifying to the importance and soundness of the plan and a battery of critics questioning whose interests are being served. As a backdrop to the trial, the city’s emergency financial manager, Kevyn Orr, and his team are negotiating deals with major creditors so that they might drop their objections to the plan.

A major topic throughout the trial has been the importance of the “Grand Bargain,” the deal that saved the collection of the Detroit Institute of Art from being auctioned in exchange for over $800 million in foundation and state funds that would help pay for the city’s public pension obligations.

According to the Free Press coverage of the trial, Kresge Foundation CEO Rip Rapson testified that “he believes the DIA is central to Detroit’s history and its future, calling it a cultural asset the city can’t afford to lose or have diminished with sales of its art to pay off creditors.” The DIA, Rapson said, is an anchor for the redevelopment of Midtown Detroit and a magnet for visitors to Detroit.

But there might have been practical problems that Orr and the foundations were trying to circumvent by virtue of endorsing the Grand Bargain. According to Free Press reporters, who have been live-blogging from the courtroom, the DIA contended that many donors of art pieces to the DIA had given with the expectation that the art would be in the DIA in perpetuity. If the city were to have tried to sell the DIA art, one possible result would be interminable litigation with the donors or their families. However, the Free Press’s staff bloggers quoted Orr in court suggesting that it was the DIA that would fight the sales:

“The DIA said it would fight and litigate every piece of art that the city would try sell,” Orr said. “The intent was that they would make it a very lengthy and painful piece of litigation.”

Orr actually raised other arguments against the sale of the DIA art, suggesting that “flooding” the market with DIA art would depress values and yield less than Christie’s, the art appraiser hired by the city, might estimate. Orr also acknowledged that as an alternative, the city could have used the DIA collection as collateral for a loan, but he said that he rejected the idea because he wanted Detroit out of the cycle of borrowing to pay off past borrowing.

All told, Orr’s position comes out quite different from Rapson’s. Rapson holds that the museum is a linchpin in the city’s redevelopment plans. Orr’s argument is that the Grand Bargain helps the city avoid lengthy and costly litigation, even if there might be the possibility that a sale of the DIA assets would yield much more money than the combined philanthropic and state resources would provide.

In Rapson’s testimony, the Grand Bargain saving the DIA is part of a larger philanthropic strategy for redeveloping Detroit. In court, according to the Free Press bloggers, Rapson presented “back of the napkin” information that foundations had invested $1.5 billion in Detroit over the past decade. The reporters were impressed with Rapson’s presentation of visuals and drawings, including the Detroit Future City project, which Kresge spearheaded as a reconceptualization of land use and other issues in a shrinking city. Although technically separate from the Detroit Future City project, which Rapson says already has $440 million in commitments, the Grand Bargain is complementary in protecting a significant cultural anchor. In Rapson’s words, the DIA is “one of those defining institutions of Detroit life.”

Some days after Rapson’s testimony, major power brokers such as Dan Gilbert, the CEO of Quicken Loans who has bought up a chunk of downtown Detroit (renamed “Gilbertville” by some), took to the stand. As an example of his commitment to the revitalization of Detroit, Gilbert testified about his work to develop a database containing information on every residential and small commercial property in the city so that at some point tens of thousands of blighted buildings can be demolished. Roger Penske, the owner of Penske Corp., apparently talked about his commitment to fund the M-1 rail streetcar (a major initiative extensively supported by Rapson’s foundation) and his contributions to buy ambulances and police cars for the city.

Nonetheless, the powerful statement came from Orr that the Grand Bargain was fundamentally a decision of legal strategy rather than city redevelopment. When federal bankruptcy Judge Steven Rhodes asked Orr why he didn’t simply monetize the DIA collection, the Free Pressreported this as the essence of Orr’s answer:

“He said he believed that not preserving the museum’s assets in a protected nonprofit trust would create nothing short of a disaster for the DIA—a public relations nightmare for the city, protracted and expensive court fights and, ultimately, irreparable harm to the museum’s reputation.”

These are two vastly different rationales for the Grand Bargain: one predicated on the redevelopment importance of a city-owned cultural and public space, the other a strategy meant to remove legal and PR roadblocks to the bankruptcy. If Rapson’s frame is the guiding perspective of the participating foundations, then the challenge is going to be one that goes beyond protecting the value of the DIA’s multi-billion dollar collection, but addresses the public cultural assets of the city raised in a question by an attorney for the creditors—the Charles H. Wright Museum (the nation’s largest African-American history museum), the Detroit Symphony, the Opera Theater, Detroit Historical Society, Motown Historical Museum, the Detroit Zoo, and many other smaller venues of spaces that might be classified as Detroit’s collective “public commons.” Rapson has been in the forefront over the years talking about the importance of the protecting and enhancing the public commons. The challenge will be, beyond the DIA, making that happen.—Rick Cohen

Disclosure: The Kresge Foundation is a foundation funder of the Nonprofit Quarterly.