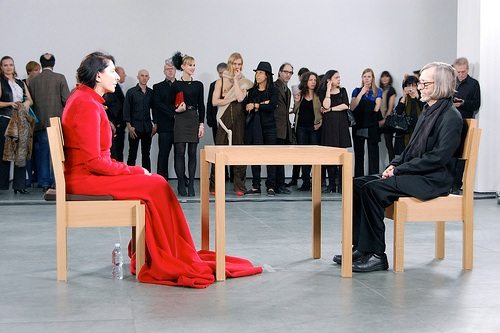 Art and spirituality have been extremely companionable over the years, often appearing together in a variety of venues and this Lady Gaga moment just extends that tradition albeit with updated tools.  Lady Gaga appears in Marina Abramović’s “long-duration” art clip to promote a Kickstarter for the nonprofit Marina Abramović Institute (MAI). In the two-minute video, the singer starts out keening, then she stands in water wearing a snail-like yellow mask, takes a nude, blindfolded stroll in the forest, and finally hugs some crystals.

This video represents the Abramović method. The Abramović Method helps participants to develop skills for observational performances of long duration through a series of exercises and environments designed to increase awareness of their physical and mental experience in the moment.

As a child, Marina Abramović was impressed by the Orthodox icons, which she believed created “inner light.” She came to the conclusion that the internal journey of enlightenment is what mattered. In the state of consciousness, a person produces light and projects it to the outside world. Therefore, the light comes from the inside, according to this method.

The Marina Abramović Institute will become the first space dedicated to practicing the Abramović Method, which prepares participants to both perform and observe long durational work. Marina Abramović envisions the performers as a living and immaterial form of art. In order to share her life experiences with the public, she incorporates three basic body positions: standing, sitting, and lying. In the video with Lady Gaga, it is easy to spot them.

Check out the video below (warning: NSFW, video contains nudity):