Lessons of the Wisconsin Recall for Nonprofits 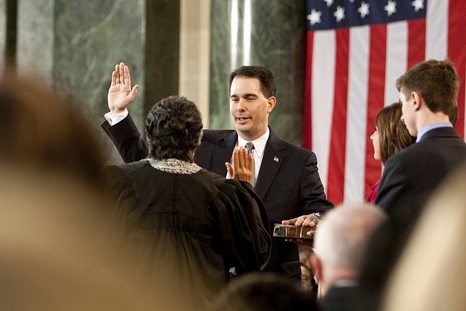 The failed recall of Gov. Scott Walker (R-Wis.) wasn’t about nonprofits per se but about labor unions and the governor’s strategy of stripping collective bargaining rights from public sector unions. However, do remember that the corporate form of labor unions is also in the 501(c) list—unions are 501(c)(5)s. It is all but impossible to imagine that the Wisconsin recall election was bereft of implications for the nonprofit sector, broadly in terms of strategies for social change and more narrowly for nonprofits. Here are some possible arenas for lessons learned.

Another Victory for Citizens United

While it would be too easy to ascribe the Walker victory simply to money, there is no question that Walker and his allies—check writers such as Rick Santorum’s backer, Foster Friess, and Newt Gingrich’s money man, Sheldon Adelson—outraised or outspent their opposition by a large number, somewhere between three to one and seven to one, depending on the source (the Center for Public Integrity has Walker outraising his opponent eight to one. The bulk of Walker’s money came from out-of-state sources. Remember that the mechanisms for this money to reach Wisconsin included a bevy of 501(c)(4) organizations. Maybe they will be a bit constrained due to the recent district court decision ruling that the Federal Election Commission had overreached its mandate in nixing part of the McCain-Feingold Act. But the alternative lesson might also be that Democrats step up their “independent” spending to counteract what they see as the power of money in the Wisconsin election—especially since the 50,000 volunteers mobilized by organized labor to knock on the doors of 1.5 million Wisconsinites possibly demonstrated that at least in this case, grassroots organizing could not overcome the power of money. That’s the continuing bad legacy of Citizens United.

The Waning Local Dimension of Politics

The New York Times analysis implied that the recall results were local or state-specific—an issue of union rights in Wisconsin. It seems to us that the lesson is just the opposite. The national attention focused on Wisconsin was not just about turning back Walker’s policies but also about the implications for other states that might be emboldened to follow Walker’s anti-union path, or about the strength or weakness of organized labor within the Democratic Party coalition, or, perhaps even more broadly, about the self-identification of voters with different political or social movements (e.g., the fact that nearly one-third of union voters voted for Walker and against the recall. Maybe this is too broad a point, but, unlike Tip O’Neill’s admonition that all politics is local, increasingly local politics is national—not just with the deluge of out-of-state moneys flowing into state and local elections but also with the national issues that are affecting all localities. Note that the Wisconsin recall election followed—by less than a week—the depressing job creation and employment numbers for May, the third successive month of bad job-news and possible indications of a double-dip recession. The political narrative wrought by the Occupy Wall Street movement, no matter what one might think of its strategies and future, is a return to a version of the Clinton reelection trope: “It’s economic inequality, stupid!” Add in the scores of workers who have dropped out of the labor force, and the many more who are involuntarily part-timers or well underemployed, and you’ll see an economic situation that is far from corrected—making votes about Walker’s policies in some ways referenda about voters’ fears and concerns about their economic future, even if the policies themselves might not be the panaceas that their proponents suggest.

Picking the Appropriate Venue for Action

Only one-fourth of the voters who showed up at the polls in Wisconsin actually thought the recall was legitimate. The remainder, including people who voted against Walker, thought that recalls should result from the office holder’s engaging in some sort of ethical or legal violation of his or her oath, not from holding opinions that others oppose. According to the Washington Post’s Jamelle Bouie, “For 60 percent of last night’s voters, a recall is only acceptable in cases of official misconduct. For 10 percent, a recall is never acceptable. It’s not that these voters are pro-Walker, pro-Obama as much as they are pro-Obama, anti-recall.” Even though the Republican Walker won by a healthy proportion, polls show that the voters favor Obama over Romney comfortably in the general election—actually by a larger margin than the vote in favor of Walker over his recall opponent. Voters didn’t vote for Walker’s plan—they voted tepidly against a process seen as inappropriate. That might have dampened some of the potential opposition of the anti-Walker voters. Nonprofits have to remember too that the way something is done is just as important as the why. As John Avlon wrote in the Daily Beast, “Recall should have a high bar—an outright crime or indictment for example—but overuse of this extraordinary recourse ignores the fact that elections have consequences.”

501(c)(4) social welfare organizations and 501(c)(6) business leagues that served as conduits for some of the unprecedented money flowing into the Wisconsin recall election are nonprofits, except that unlike 501(c)(3) public charities, donations to them are not tax deductible. Nonetheless, there is plenty in the Wisconsin recall dynamic that touches on issues well discussed within the nonprofit sector, particularly for communities of color. Colorlines, for example, reports that Walker carried every age cohort of voters except for those between the ages of 18 and 29. The Colorlines article suggests that young people, particularly college students, found themselves on occasion blocked at the polls or even asked for photo IDs, an eligibility requirement that has been rejected in Wisconsin. A Tea Party–affiliated group called “True the Vote” apparently showed up in Wisconsin with loads of poll watchers, which Colorlines and others hinted was aimed at suppressing the turnout of young and black voters. Other nonprofit-related issues emerged in the election—not big ones, but intriguing nevertheless—such as critics of Walker’s opponent, Milwaukee mayor Tom Barrett, who pointed out Barrett’s opposition to school vouchers for pupils to attend nonprofit private schools, even though his own children attend the same schools that would have benefited from vouchers. While winning the vote in Milwaukee, Barrett lost the city’s inner-ring suburbs and overall lost the vote in its metropolitan area, which notably ranks at the top (along with Detroit and New York City) in terms of metropolitan racial segregation. Are nonprofits recognizing and dealing with the pernicious effects of racial segregation and the racially disparate outcomes of otherwise race-neutral policies? Are they noting within the Wisconsin results an increasing polarization of Americans in our supposed post-racial society?

The mainstream press is debating whether the Walker victory means that President Obama is in trouble in Wisconsin or not, whether the political clout of organized labor will wane more than it already has, and if the Obama campaign will now attract new donors to match the open Friess and Adelson wallets. Nonprofits should be asking what the Wisconsin recall means for the future of American democracy and what they should do in that context to weigh in.—Rick Cohen