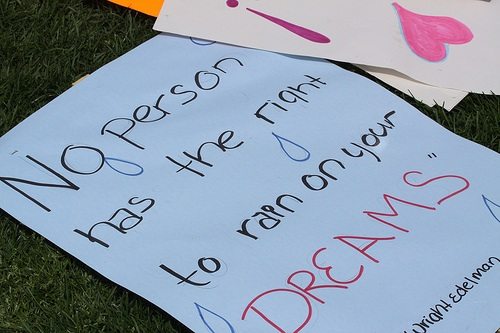 This week, senators will be offering amendments to the immigration bill crafted by eight of their colleagues. Advocates have been working overtime on lawmakers to make sure that changes in the measure reflect their interests. LGBT groups have been among the most vocal, protesting the exclusion of same-gender bi-national couples and insisting that any bill voted on by the full chamber include LGBT immigrant families.

Sen. Patrick Leahy (D-VT) has indicated that he would offer an amendment allowing gay Americans to sponsor their foreign-born spouses and partners for green cards, a privilege enjoyed by straight Americans. Republican senators have warned that such a move would be a “poison pill” which would kill any immigration bill. “It will virtually guarantee that it won’t pass,” Sen. Marco Rubio (R-FL) told POLITICO. “This issue is a difficult enough issue as it is. I respect everyone’s views on it. But ultimately, if that issue is injected into this bill, the bill will fail and the coalition that helped put it together will fall apart.”

Religious fundamentalists and other conservatives have weighed in, threatening to withdraw support if immigration reform were inclusive. “We strongly would oppose the provision and it could force us to reconsider our support for the bill,” said Kevin Appleby, director of the Catholic Bishops’ Office of Migration and Public Affairs.

LGBT advocates are calling that bluff. “We do not believe that our friends in the evangelical faith community or conservative Republicans would allow the entire immigration reform bill to fail simply because it affords 28,500 same-sex couples equal immigration rights,” reads a joint statement from the National Center for Lesbian Rights, GLAAD, the National Gay and Lesbian Task Force, United We Dream, and the Queer Undocumented Immigrant Project. “This take-it-or-leave-it stance with regard to same-sex bi-national couples is not helpful when we all share the same goal of passing comprehensive immigration reform that provides a path to citizenship.”

The president, who has chosen to let Congress take the lead in forging immigration legislation, has hedged on the matter. While he continues to assure LGBT and other progressive groups that he supports the inclusion of gay bi-national couples, he has also made it crystal clear that he will sign compromise legislation that will leave some sectors disgruntled. “I can tell you I think that this provision is the right thing to do,” he said. “I can also tell you I’m not going to get everything I want in this bill. Republicans are not going to get everything that they want in this bill.”

President Obama is spot on in that not everyone will be happy. Should a final bill pass, it is very possible that gay bi-national couples will not be part of it. Fact is, compromises are made and deals brokered whenever legislation is crafted. Moreover, some constituencies are more valuable than others. In this situation, the LGBT lobby will not prevail as there are far more important players to please and the “greater good” to consider.—Erwin de Leon.