Liberals and the Movies: Aha! Movies Do Alter Political Opinions! 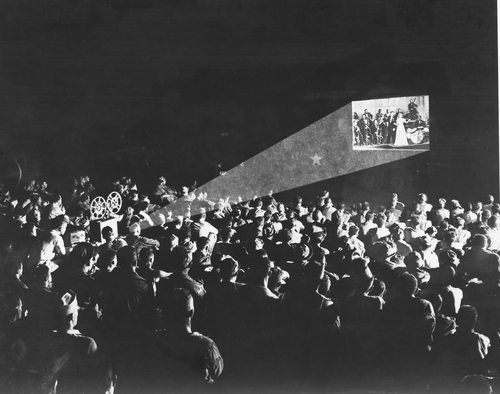 A recent study published in Social Science Quarterly titled “Moving Pictures? Experimental Evidence of Cinematic Influence on Political Attitudes” found that people who watched one of two sentimental movies (either Francis Ford Coppola’s fairly polemical The Rainmaker or James L. Brooks’ more subtle As Good As It Gets) experienced “leftward shifts” in their attitudes, often becoming more supportive of the Affordable Care Act, or other “liberal” health care polices. According to Dr. Todd Adkins, the study’s principal author, “Viewers come expecting to be entertained and are not prepared to encounter and evaluate political messages as they would during campaign advertisements or network news.”

So Mother Jones went looking for other studies where moviegoers were shown to have experienced an inadvertant turn to the right of left or otherwise after seeing a particular film. Below are excerpts of what they found:

JFK destroyed your faith in the American political system

In a 1995 study of viewers before and after seeing the film, Stanford psychologist Lisa Butler et al. found that seeing the movie JFK “doubled the level of anger” of viewers and “was associated with a significant decrease in viewers’ reported intentions to vote or make political contributions.” The researchers attributed this response feeling of helplessness.

The Day After Tomorrow made you care more about global warming.

Yale researcher Anthony Leiserowitz conducted a national survey three weeks after the film’s release, and found that 83 percent of film viewers said they were “somewhat” or “very concerned” about global warming, compared with 72 percent of nonwatchers.

A 2011 study by Kenneth Mulligan and Philip Habel at Southern Illinois University found that the “fictional framing” of the abortion issue in The Cider House Rules made audiences more supportive of safe and legal abortion. “Participants who were randomly assigned to watch [The Cider House Rules] were more favorable toward legalized abortion in the case of incest than those in the control group,” the authors wrote. In fact, they added, “the movie had a significant effect despite the fact that opinions on abortion tend to be deeply entrenched.”

Malcolm X inspired you to be more concerned about racial discrimination and race relations.

In a 1997 study in the Journal of Politics, Darren Davis of Michigan State University and Christian Davenport of the University of Colorado-Boulder examined the affect of the 1992 film Malcolm X (directed by Spike Lee and starring Denzel Washington) on African Americans in Houston. The study found the film, and the way it was reinforced in other media, to be “quite powerful in altering political attitudes” among the study subjects.

All the President’s Men caused Republicans to favor more restrictions on the press.
All the President’s Men is actually credited with boosting enrollment numbers at journalism school in the United States, due to the heroism of the two journalists. The film also affected the Republican and Democratic attitudes towards the press, according to a 1979 study by professors William R. Elliott, of the University of Oregon, and William J. Schenck-Hamlin, of Kansas State University. As you would probably guess, the study found that the movie caused liberal viewers to have a more positive view of the press and caused conservative ones to hold a more negative one.

What movies would you nominate as political attitude–changing?—Ruth McCambridge