Liberty U. President Offers to Haul Out His Weapon at Student Convocation 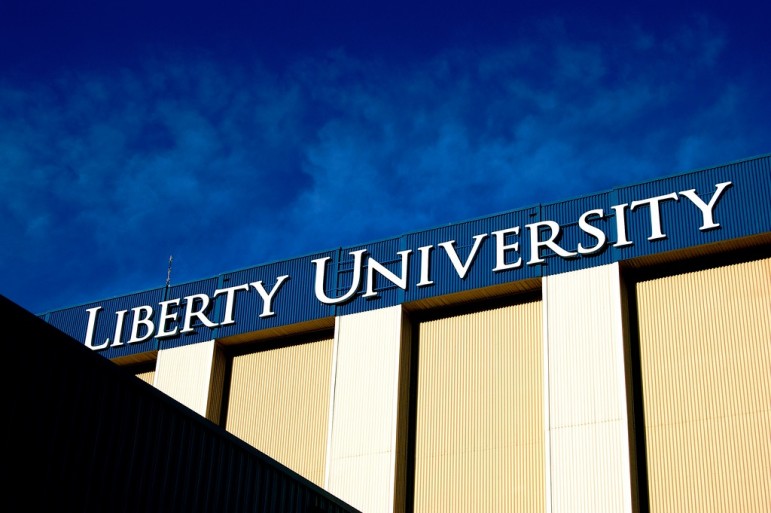 Readers may recall Liberty University as the school that held a rally in March at a campus convocation for Ted Cruz, at which he announced his candidacy for president to an impressively packed crowd. The crowd, however, was not necessarily there to support Cruz, since convocations at Liberty require the attendance of students. Some students made their dissatisfaction known through social media at the time.

Now, the university’s president, Jerry Falwell, Jr., has, at another mandatory convocation, encouraged students to apply for concealed-weapons permits.

“I’ve always thought if more good people had concealed-carry permits, then we could end those Muslims before they walked in and killed us,” he said. “Let’s teach them a lesson if they ever show up here.”

He also alluded to the possibility that he might have been armed at the time. “If some of those people in that community center had what I’ve got in my back pocket right now…is it illegal to pull it out? I don’t know.”

Falwell took the stage after a speech by former Senator Jim DeMint—now CEO of the conservative think tank, the Heritage Foundation—to encourage students to enroll in a free Liberty University course offering that walks them through the application process for a concealed-carry permit.

In his own speech, DeMint shared “life lessons,” saying about Liberty University that, “There’s not too many places in America where one can speak openly about the truth and the reality of the physical and spiritual worlds, about the faith-based foundations for right and wrong, about the futility of a myopic secular view of our human existence and about how all of these truths must be integrated across the lines of our personal lives and relationships, our careers, our spiritual lives, and our politics.”

“If governments ignore the spiritual nature of mankind, they cannot govern effectively, and if government polices endorse and promote the destructive aspects of human nature rather than restrain them, they will create uncivil chaotic societies,” DeMint said.

A day later, Falwell tweeted that his remarks only applied to “those Muslims” who commit acts of terrorism. In the News & Advance, a newspaper in Lynchburg, Va., he was quoted as saying, “There are many good Muslims, many good moderate Muslims,” who would be welcome at Liberty University.—Ruth McCambridge