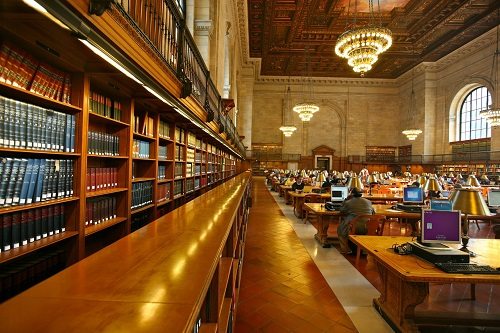 A decade ago, some thought that libraries could be expected to waft into antiquity, but in an article in the New York Times, Susan Benton, president and chief executive of the Urban Libraries Council is quoted as saying of libraries that both “physical visits and virtual visits are off the charts.” For example, just at the central facility for Boston Public Library, the number of physical visits alone increased between 2012 and 2013 by almost 500,000 to 1.72 million in 2013.

Librarians suggest that these increases are due to a combination of factors, which includes the recession and technology, but also the efforts that libraries are undertaking to refit themselves to their communities in some very inviting and innovative ways that go well beyond the flatfooted “let’s all get totally digital!” idea. Beyond redesigns of spaces designed to create more room for collaborative and creative intellectual activity, some augmentations to function have been added, making libraries more attractive and “sticky” community centers. For instance, the Chicago Public Library offers a free “Maker Lab” with access to 3-D printers, laser cutters, and milling machines. Washington State’s Lopez Island Library lets people borrow musical instruments. The Library Farm in Cicero, New York, even lets patrons interested in organic gardening borrow plots of land.

The role of the librarian is even changing, from information locator to curator. “When I started out in the ’70s,” offered Amy Ryan, president of the Boston Public Library, “you would walk up to the reference desk and ask a question and I would find an answer. Today it’s the opposite. People turn to librarians to help them sift through the 10 million answers they find on the Internet. We’re more like navigators.”—Ruth McCambridge