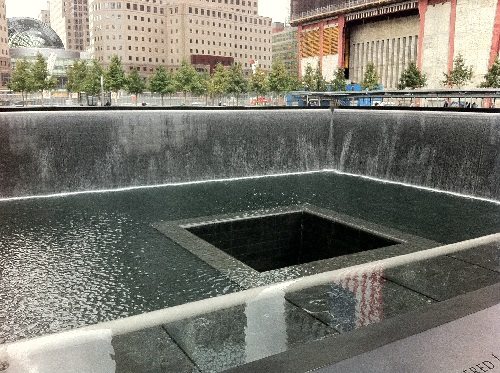 Last week, President Obama dedicated the 9/11 Museum on the site of the tragedy, which also serves as the burial ground for those victims whose remains were not recovered. While controversy has unsurprisingly dogged this sensitive project, it showed up again when some families of victims realized that there was a gift shop selling mugs, T-shirts, hoodies, jewelry, scarves, and other souvenirs in the museum.

While gift shops are a staple of the revenue mixes of many museums, Kurt Horning, whose son died in the attack, called it “crass commercialism on a literally sacred site…It’s a burial ground. We don’t think there should be those things offered on that spot…. If you want to do it, do it someplace else—but not right there.” And, indeed, there are plenty of places that sell such memorabilia in that area.

Horning and his wife Diane are founders of WTC Families for a Proper Burial, which sued New York City for the right to bury the remains contained at the site. “Here is essentially our tomb of the unknown,” Diane Horning told the New York Post. “To sell baubles, I find quite shocking and repugnant.”

The tabloid New York Post, famous for its headlines, may have helped call attention to and stir up outrage about what it dubbed on its front page a “little shop of horror.” This article notes that there are gift shops at the Oklahoma City National Memorial & Museum and the U.S. Holocaust Museum.

Just to place this in its proper context, an article by Steve Kandell, who is Buzzfeed’s feature editor and whose sister died in the attack, brings us into the raw pain of a visit to the museum, including the gift shop.

“Everyone should have a museum dedicated to the worst day of their life and be forced to attend it with a bunch of tourists from Denmark. Annotated divorce papers blown up and mounted, interactive exhibits detailing how your mom’s last round of chemo didn’t take, souvenir T-shirts emblazoned with your best friend’s last words before the car crash. And you should have to see for yourself how little your pain matters to a family of five who need to get some food before the kids melt down. Or maybe worse, watch it be co-opted by people who want, for whatever reason, to feel that connection so acutely.”

“By the time I finally reach the gift shop, the indignation I’ve been counting on just isn’t there. I stare at the $39 hoodies and the rescue vests for dogs and the earrings and the scarves and the United We Stand wool blankets waiting for that rush and can’t muster so much as a sigh. The events of the day have already been exploited and sold in ways previously incomprehensible, why get mad at a commemorative T-shirt now? This tchotchke store—this building, this experience—is nothing more than the logical endpoint for our most reliably commodifiable national tragedy. If you want to bring a coffee table book full of photos of cadaver dogs sniffing through smoking rubble back home to wherever you’re from, hey, that’s great. This is America, you can buy what you want; they hate our freedom to buy what we want. People will find moments of grace or enlightenment or even peace from coming here, I don’t need to be one of them. I’ll probably bring my son one day once I realize I won’t have the words to explain. It can be of use. It’s fine. I don’t know.”