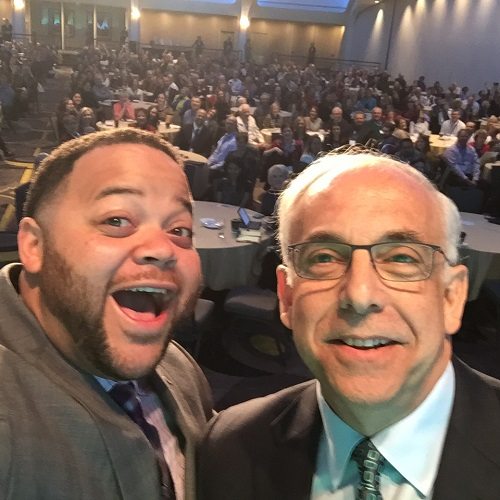 It is a sign of the times, but plenary speakers at foundation conferences are showmen and showwomen, able to deliver a standing speech without a dais, marching across the stage, holding nary a scrawled note to read from, using multimedia slides and films interspersed in the presentation.  With Michael Smith, the director of the federal government’s Social Innovation Fund until only a couple of days ago since he’s now moving on to lead the White House’s My Brother’s Keeper initiative, a plenary presentation is a compelling, high-energy show.

His message to the assembled participants in the Exponent Philanthropy conference was fundamentally a challenge to how these philanthropists make their funding decisions.  Citing Americans’ being “obsessed with data,”  Smith said that when it comes to funding 1.5 million nonprofits, “we throw that love for data away.”  Smith suggested that more than half of nonprofits don’t have a logic model or theory of change and therefore can’t really fully explain how they plan to get things done and measure their impact.  To an audience of individual philanthropists who frequently make their funding decisions based on very personal engagement with the nonprofits they fund, Smith challenged making grant decisions based on isolated stories of success or what friends tell us.  The “worst sin,” he said, was making decisions on how many people are served as opposed to the impact of nonprofits.

Posing straw men options of taxing the wealthy more, doing more with less, or letting more people in the richest country in the world do without, Smith suggested a fourth option—“bet on the winners,”  the organizations that can present meaningful evidence of impact.  That, he says, is the underpinning of the Social Innovation Fund that he has led, emphasizing “innovation to disrupt the status quo,” evidence rather than isolated stories of success, and scaling up what works.  Examples that he cited included REDF, which he said believes, “if a community doesn’t have a business that it needs, we’re going to create it and hire the hard to employ”, the Corporation for Supportive Housing, and the Year-Up mentoring group.

To his immense credit, Smith is a powerful and productive survivor of the tough streets of Springfield, Massachusetts, the son of a teenage single mom, the brother of a sibling who was shot to death in broad daylight.  Springfield is a city that this author knows well, with social statistics that have been declining rather than progressing over the years.  He cited the Boys and Girls Club as the mechanism, the “safe space,” that saved him from the life that so many others in Springfield have suffered from and succumbed to.  Mentoring, safe spaces, opportunities for engagement and support are the kinds of program emphases that have been present in the Obama Administration’s My Brother’s Keeper program, which Smith will be heading.

The connection between his new gig at My Brother’s Keeper and the convening of a thousand small foundation philanthropists was his challenge to the assembled that too often, “we go to meetings like this to pat ourselves on the back for doing good enough…I have to ask, where is the outrage, where is the sense of urgency, where is the demand for result.”  He called for actions and measures that lead to “a sure path to opportunity and hope.”  In that regard, he made three suggestions to the funders in the room:  1.  Be fearless (he presented a “be fearless” video from the Case Foundation, where he previously worked, suggesting that social movements do not succeed when they are incremental or get caught by “paralysis by analysis”, but when they make big bets to make history, experiment early and often, and learn from failure); 2.  He cautioned, “don’t donate another dollar unless the organization you’re writing a check to has evidence of impact…Take a stand, we cannot afford to give willy-nilly, we have to invest in results”; and 3.  Know when to walk away, when something is no longer working, when we have to invest our dollars differently.

As inspiring as Smith’s high energy, multi-media talk was, it left a few questions.  Despite going to My Brother’s Keeper, Smith didn’t address what that initiative was or wasn’t doing or whether itself it is more incremental than fearless.  Smith didn’t take questions after the talk, though he did do a full crowd selfie—quite well done, by the way–with Exponent Philanthropy’s CEO Henry Berman.  It would have been good and important for the philanthropists attending the conference to ask how My Brother’s Keeper measures up with a “theory of change” and “logic model” as opposed to being what some might see it to be, a compilation of grant support for programs that are already well known to exist and do things well—like the Boys and Girls Club—but without any new federal commitment to boost them to the point where they can turn around situations like Springfield’s—or, oddly not mentioned in that kind of presentation given its recency, Ferguson’s.

Is My Brother’s Keeper a big bet or a public policy safe space?  It would have been a productive topic to explore for funders who may not be the typical funder listed as having committed dollars to this White House initiative.

The other quick aspect of the talk was that the emphasis of the call for data collection and impact evidence leaned toward the service providers and omitted what often really makes social movements tick—the activists, the advocates, the social disruptors.  Smith’s talk ended with inspirational quotes from Rev. Martin Luther King, Jr., but King wasn’t a service provider, he was an agitator for social justice.  While some foundations provided tepid support to King and other civil rights leaders at the time, most of philanthropy steered clear of the turbulence of King and others.  Would Smith be able to expect the protesters on the streets of Ferguson or the young advocates in Florida protesting the killing of Trayvon Martin and Jordan Davis for the rigorous evidence of their impact and decide whether or not to support their nascent efforts based on the data they might be able to show from their organizational logic models?

Who funded the civil rights movement that created the most synoptic change our society has undergone since the Civil War?  It was philanthropists who got to know civil rights leaders like King and others and engage them directly.  Sometimes, one has to thank Providence that they didn’t ask King to present a logic model and show a plan for collecting data to assess the specific outcomes he would generate this year or that year.

Smith had a lot to offer the Exponent Philanthropy crowd, but these small philanthropists should remember that social change, that social movements  are much more than service delivery.  Activists and advocates demand the changes in policies and demand support for programs that lead to the kinds of efforts of a Corporation for Supportive Housing or even My Brother’s Keeper.  Too often, in gatherings like this, small funders are encouraged to support services, all well and good, but overlook the need for supporting the infrastructure of community-based advocacy that makes social change—and social movements—happen, work, and survive