LIVE BLOG: The Awkward Fit of Politics and Philanthropy 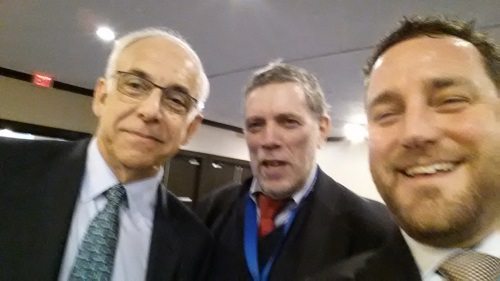 Aaron Dorfman and Henry Berman at the Exponent Philanthropy Conference

When do politics and philanthropy intersect?  The better question might be, when don’t they?  It is always odd to think of philanthropy as somehow existing in some sort of bubble choosing or not choosing to open the philanthropic door to politics.

Aaron Dorfman of the National Committee for Responsive Philanthopy, Diana Aviv of Independent Sector, Stacy Palmer of the Chronicle of Philanthropy, and Jonathan Greenblatt from the White House’s Office of Social Innovation discussed the contours of philanthropy and politics rubbing shoulders.  If attendees expected fireworks and hand-to-hand ideological combat, it didn’t happen, but it’s not clear whether that was because the four were quite so politically compatible as much as the tendency of philanthropists—and philanthropic commentators, even critics—tend to be nice and polite in these forums and not particularly wont to grapple.

Even so, each had something distinctive to offer that should get philanthropists thinking:

Aviv made sure to point out that on Capitol Hill, legislators are still raising the questions that former senator Max Baucus and current Representative Xavier Becerra have long floated—if government is going to provide extensive incentives for charitable and philanthropic giving, what is philanthropy delivering to their states, their constituencies (for Baucus, rural, for Becerra, inner city poor) that warrant what government offers.  Despite electoral changes, Aviv warned that interest in tax reform will continue, no matter who heads House Ways and Means or Senate Finance, and the content and contribution of charity and philanthropy could be one of the items on the table for discussion and debate.

Dorfman broadened his framework beyond issues of explicit and direct concern to nonprofits and foundations such as tax deductions and donor-advised fund payouts.  He said, “the bigger question is how well do we in philanthropy leverage our limited dollars to see what we want to happen in the world.”  “It’s important,” Dorfman added, “that government has enough revenue to play its role in society so that philanthropy is able to play its role.”  But what is that role?  Dorfman expressed a feeling of encouragement that a “growing number” of foundations are investing in policy advocacy, community organizing, and civic engagement work.

Palmer added her perspective that among political leaders, there’s a concern about where foundation money is going and “whether it is doing any good,” due to a frustration, she said that “we haven’t solved social problems.”  But Palmer added a consistent theme to the conversation about foundation roles in improving the operations of government and protecting and advancing democracy.  Citing research from the Center for Effective Philanthropy, she suggested that the “biggest impediment” to philanthropy is  dysfunctional government and government funding cuts.  “Philanthropy can’t do its job,” she said, “without finding ways of helping government [to] work…better.

Both she and Aviv raised fundamental questions about democracy itself.  Aviv reminded conference participants that the IRS was still working on defining what constitutes political activity (in the context of 501(c)(4) social welfare organizations, but clearly applicable to 501(c)(3) charities in many ways).  “If getting out of the vote becomes a political activity rather than a civic activity as it has traditionally been,” she observed, “that will change the landscape of our work,” implicitly getting in the way of nonprofits achieving their mission.  Palmer raised the question about some philanthropists working both sides of the political space, though philanthropic contributions to public charities and through political contributions to tax exempt but not deductible groups, as in the case of former NYC Mayor Michael Bloomberg, raising implications for how our democracy functions.  As Aviv said, “can we achieve any change unless democracy itself works better?”

What did they say that politics needs to hear from philanthropy?

Palmer said that she hears legislators say that they have foundations talking to them about the charitable deduction and other nonprofit issues, but not about the substance of what philanthropists are learning from their grantmaking about what works—and that’s what she indicated they hunger for.

Dorfman suggested that there is a way of leveraging impact with legislators at national and local levels by investing in grassroots advocacy, with a potentially significant ROI.  Aviv agreed, but added the need to think about effective advocacy and building capacity so that the kind of investments Dorfman suggested really pay off.  Dorfman added the importance of funding the grassroots advocacy infrastructure of “rabble-rousing groups,” historically crucial for moving issues forward, though truth be told, they aren’t usually high on the grantmaking agendas of philanthropists large or small.

They ended with an important political issue that isn’t simply political (as though any are so easily isolated).  Dorfman noted that the increase in philanthropy over the years is correlated with an increase in inequality in our society.  One might ask whether philanthropy has done what it can and should about inequality or even if in many cases, it has abetted it.  Aviv and Palmer both included the importance of addressing—as philanthropists, as a society—just what to do about having such persistent and deep inequality in this nation.    Perhaps that’s the next panel for Exponent Philanthropy to convene:  not about the intersection of politics and philanthropy, but the juxtaposition of societal inequality with the tremendous and increasing wealth that fuels philanthropy , to ask exactly what philanthropy can and should do if inequality is a societal issue that threatens everyone’s prosperity.