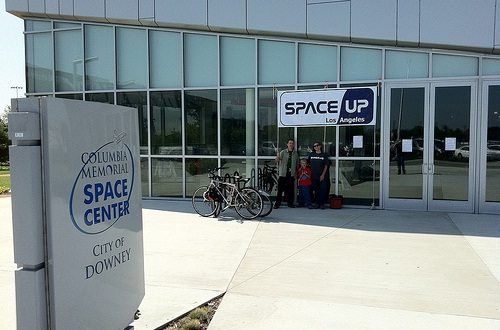 The close relationships between museums and the cities in which they reside were highlighted by two stories in the news this past week.

Most people around the world know that since the beginning of the U.S. space program 55 years ago, Cape Canaveral in Florida is where American space missions have begun. But not nearly as many know that most of the satellites, space vehicles, and rocket boosters used in the U.S. space program were designed and built in nondescript factories in the suburbs of Los Angeles. The southeast Los Angeles County city of Downey, in particular, was where the Apollo moonshot command modules, and later the Space Shuttle, were built.

The city of Downey (population 110,000) put up $8 million to open the Columbia Memorial Space Center in 2009, a modernistic building, filled with artifacts from the space program, built as a hands-on learning center, museum and memorial to the seven astronauts killed in 2003 when the space shuttle Columbia broke up as it reentered Earth’s atmosphere. The center sits on part of the former manufacturing site. But the Times reports that today the space center is struggling to attract visitors and donors, and city officials are hard pressed to help fund the operations of the struggling institution, with a deficit of more than $500,000 that comes from city coffers.

“Our city government is not in the business of running museums,” Mayor Fernando Vasquez told the Times. The city council has “been committed to supporting this museum, but at some point, we need to see a plan that’s sustainable.”

Critics tell the Times that a lack of leadership has contributed to the museum’s problems: the center had an executive director for only the first eight months of its five-year history; otherwise, it’s been run by city employees only devoted to the museum part-time. Some say it is not a priority amidst the city’s budget cutbacks in the Great Recession and the loss of its manufacturing base.

But once the original investment has been made, it is hard and probably ill-advised to walk away. City officials have started the search for a full-time executive director. Officials told the paper that an experienced executive director would know how to raise money, bring in popular exhibits, and find creative ways to generate revenue, which the museum desperately needs.

Meanwhile, on the other coast, the New York City Economic Development Corporation (EDC) has its hands full with Staten Island’s National Lighthouse Museum, according to an editorial in the Staten Island Advance, which serves New York’s most suburban and residential borough. In 1998, Staten Island was chosen as the site for the museum in a hard-fought national competition. Former mayor Rudolph Giuliani was a big supporter and funded the effort. But then the project stalled, the board was dissolved, and the nonprofit museum lost its lease on the waterfront property where it was to be located.

The Advance editorial said that a new board was formed and the EDC agreed to give the museum an 18-month interim lease on the property so that the institution could prove itself. A goal was set to raise $350,000 in private dollars, which the new board did. Unfortunately, under EDC’s rules, the museum was $25,000 short, because that amount was a pledge of state funding from a local assembly member.

The editorial says that EDC backed out of its commitment on a technicality, and the deadline for the museum to get possession of the site had passed. But museum organizers stepped up again and raised the money, surpassing its previous total, beating the goal by over $50,000 through money garnered from board members, several foundations, and small donors, primarily lighthouse fans across America.

“The bottom line: the National Lighthouse Museum board met the challenge—twice. Cold cash is in the bank. The ball is back in the Economic Development Corporation’s court,” it continued, adding that “although they certainly have proved themselves over the past three years to get this far, we will never know unless the EDC allows the National Lighthouse Museum board members to get to work so they can provide a product to sell to the public, and to future funders.”

These two stories illustrate the need for carefully structured public private collaborations backing most museums. For the most part, government agencies are not very good at funding, developing, and running cultural institutions like museums and performing arts centers on their own. This is because of the importance of fundraising to success; government knows how to collect taxes and fees, but is not set up to develop donor relationships and engage in fundraising campaigns.

In addition, by its very nature, government leadership is characterized by “inside the box” thinking, which protects the public purse, but often leads to a failure to innovate and adapt to changing times. These are things more entrepreneurial private, philanthropically supported, organizations do better. Cities are often motivated to create cultural institutions as a tool of economic development, which speaks volumes about their pride in their history, culture, and locale, but that still doesn’t necessarily mean they are capable of operating and programming them well.

Finally, it is tough for city officials confronted with prioritizing basic services like police and fire protection, trash collection, and maintaining infrastructure to give cultural amenities the attention and cultivation they need to be successful. However, there are examples of local government forging successful partnerships with community-based private nonprofits, usually where the public agency builds and owns the building but the nonprofit operates and programs it.—Larry Kaplan

More about: Board DevelopmentFinancial ManagementOrganizational culture and its driversPolitics