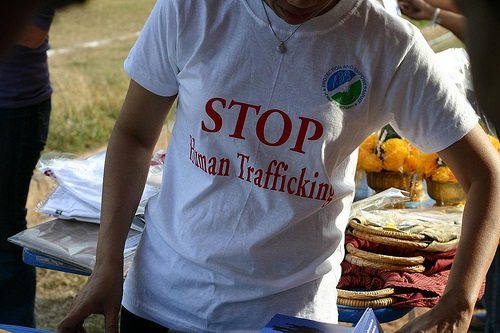 London was stunned last week with the discovery of a couple who had held three women as slaves for 30 years. The three women, one from Malaysia, another from Ireland, and a third who appears to have been born in captivity, were rescued as a result of a call made by the Irish woman to a nonprofit called Freedom Charity. She learned of the organization through seeing a television show about the anti-trafficking organization. There is no question that despite her “deeply traumatized” condition, the woman displayed tremendous courage.

After 30 years of slavery, the women’s rescue occurred rapidly. On October 9th, the ITV network broadcast the television show about Freedom Charity’s work about young girls forced to marry against their will. The 57-year-old Irish woman apparently memorized a helpline number from the show. Nine days later, she contacted the helpline and explained what she and her companions had gone through. For the next week, the director of Freedom Charity, Vineeta Thornhill, had prearranged calls with the woman to both build up trust and to make arrangements for the rescue of all three. Within that period, Freedom Charity contacted the police to work on the planned rescue.

On October 25th, the Irish woman and the young woman met with Freedom Charity staff at a specified location and revealed where they had been held, after which the police rescued the third woman. After working with the women to establish the facts of the case, on November 21st, the police arrested the man and woman who had held them prisoner in south London for those decades.

This London case eerily echoes the recent horrifying story of Ariel Castro’s imprisonment and sexual abuse of three women in Cleveland for over a decade. These may be among the most disturbing recent examples of modern slavery, but they are sadly much less uncommon than most suspect. This past summer, three people in Ashland, Ohio were charged with federal labor-trafficking for holding a mentally disabled woman and her child prisoner for two years in a basement they shared with pit bulls and pythons. The reality is that there are millions of people around the world held in conditions of modern slavery.

A Washington, D.C.-based nonprofit that works on all forms of human trafficking, the Polaris Project reports that there has been a 259-percent increase in calls to the National Human Trafficking Resource Center between 2008 and 2012. Polaris’s hotline has led to the investigation of almost 9,300 cases of trafficking. The FBI reports that federally funded task forces investigated 2,515 suspected incidents of trafficking in the U.S. between January of 2008 and June of 2010, eight out of ten involving sex trafficking, and one out of ten labor trafficking.

“Labor trafficking occurs in diverse contexts that encompass all forms of labor or services. Common places where forced labor has been found in the United States include domestic servitude and small-scale ‘mom and pop’ labor operations, to more large-scale operations such as farms and factories. Certain labor brokers that supply labor to multinational corporations have also been identified as an emerging type of labor traffickers. Sex trafficking includes commercial sexual exploitation of children (CSEC), as well as every instance where an adult is in the sex trade as the result of force, fraud, or coercion. Sex trafficking occurs within numerous venues in the broader sex industry, commonly found in street prostitution, online escort services, residential brothels, and brothels disguised as massage businesses.”

In 2012, President Obama announced a commitment to fight human trafficking in the U.S. It is a shadow market that exists in all countries, including this one, but one which the nonprofit sector appears to be taking the lead in fighting to end.—Rick Cohen