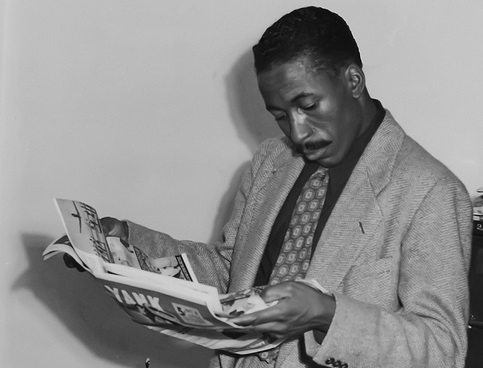 If you’ve seen Star Wars yourself or know a kid who is currently under the spell of that phenomenally successful movie franchise, the name “George Lucas” is apt to stir up magical visions of Jedi knights and Luke Skywalker first and foremost. What might be less well known is that Lucas has used his wealth from the movie industry to establish a reputation as an active philantropist. He signed the Giving Pledge in 2010 and remains involved with Edutopia, the George Lucas Educational Foundation. Lucas’s latest gift with his wife Mellody Hobson emerged from personal connections, like most major gifts, and is notable for its aspirational nod to Gordon Parks’ art and commitment to social justice.

According to the Chicago Tribune, Lucas and Hobson have made a $25 million pledge to After School Matters, a Chicago nonprofit for which Hobson is board chair, bringing “the couple’s commitment to Chicago institutions to at least $50 million since marrying last year.” Hobson also serves as president of Chicago-based Ariel Investments, and her Ariel colleague, John W. Rogers, chair and CEO, is an alum and chair of the board of the University of Chicago Lab Schools.

Commenting on the opportunities that Hobson has had to learn about the Lab Schools during their work together, Rogers told the Tribune, “She had a chance when (U.S. Education Secretary and Lab School alum) Arne Duncan worked at Ariel. She’s gotten to know other Lab grads.” Rogers added, “She’s come to believe what it stands for, how unique it is.”

Rogers noted that he believed the gift, which will support a new arts center named after artist Gordon Parks, will be the first building on the University of Chicago campus named after an African American. In a statement, Hobson said, “It was important to us that the University of Chicago campus have a building named for an African American, given the diverse community in which it sits, and the outstanding contributions to our society by people of color.”

Best known as a photographer and photojournalist, Gordon Parks was also a writer, filmmaker and composer who died in 2006. The Gordon Parks Foundation, an entity that preserves Parks’ work and extends “the common search for a better life and a better world,” describes Parks as a “humanitarian with a deep commitment to social justice” who left a “body of work that documents many of the most important aspects of American culture from the early 1940s up until his death.” Through the foundation’s archive, it is possible to view some of Parks’ documentary and portrait photographs focusing on civil rights and poverty, many of which were taken in Chicago. In a statement released by the University of Chicago, George Lucas said, “We believe in the power of art to transform lives and communities. Gordon Parks’ work did just that.”

The Tribune reports that the Lab Schools’ recent school-wide campaign goal was set at $40 million; with Lucas and Hobson’s lead gift for the new arts center, it has raised $80 million. Scheduled to open in 2015, the arts center is slated to include a two-story theater along with a range of classrooms, galleries and performance spaces. The school’s live arts hall construction cam is a way for donors and others to track progress with the site.—Anne Eigeman