Last week, the President’s Advisory Commission on Election Integrity rolled into action and raised a big fuss. In a letter from its Vice Chairman, Kansas Secretary of State Kris Kobach, it asked each state to provide input and also detailed voter records dating back to 2006. For some states, the creation of this voter database was a sign of the Commission’s real purpose: the beginning of a national effort to repress the voting power of poor and minority voters. Each state must decide whether and how to comply. 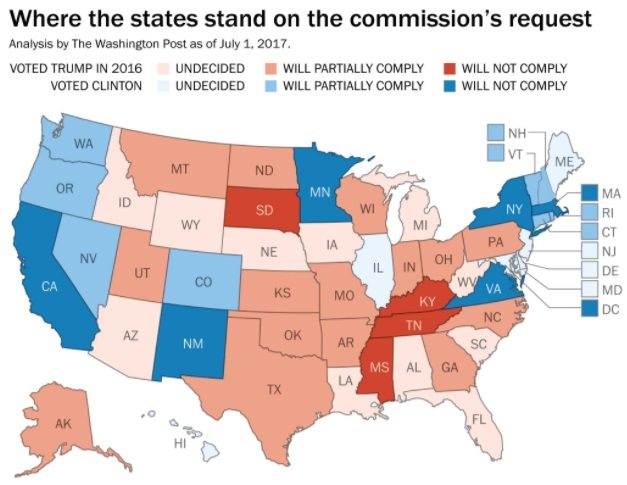 It is the commission’s stated objective to “fully analyze vulnerabilities and issues related to voter registration and voting.” President Trump created the commission in May after he falsely claimed that as many as five million illegal voters, including many undocumented immigrants, had tainted the November election. In naming Vice President Mike Pence and Kansas Secretary of State Kris Kobach, both proponents of stronger voter identification laws, to lead the commission, he seemed to be making it clear that its purpose was to lead a national voter suppression effort. The commission’s letter to the states did little to assuage this fear.

These concerns would have faded if all the commission sought to do was gather input and guidance from state officials knowledgeable about their election processes. However, the areas of concern listed by Kobach cover a wide range of issues.

The request created a chorus of opposition from those fearful of how the information will be used or misused.

California’s Secretary of State Alex Padilla issued a statement that strongly spelled out the case of those who see the commission as having a nefarious purpose. It reads,

I will not provide sensitive voter information to a commission that has already inaccurately passed judgment that millions of Californians voted illegally. California’s participation would only serve to legitimize the false and already debunked claims of massive voter fraud made by the President, the Vice President, and Mr. Kobach. The President’s Commission is a waste of taxpayer money and a distraction from the real threats to the integrity of our elections today: aging voting systems and documented Russian interference in our elections…The President’s appointment of Kobach—who has a long history of sponsoring discriminatory, anti-immigrant policies including voter suppression and racial profiling laws—sends a clear and ominous message. His role as vice chair is proof that the goal of the commission is to enact policies that will result in the disenfranchisement of American citizens.

Other state responses include:

It may also be worth noting that Kobach himself hesitated to provide the level of information his commission asked for. According to the Kansas City Star, “in a follow-up interview Friday, he said the state would not be sharing the Social Security information at this time.”

Critics fear that, with a national database in hand, the Trump administration will launch a national effort to bar eligible voters from the voting booths. Citizen advocacy organization Common Cause President Karen Hobert Flynn said in a statement that the commission would rely in part on the faulty Interstate Voter Registration Crosscheck program, launched by Kobach. According to Flynn,

The program has improperly cut hundreds of thousands of eligible voters from the registration rolls due to mismatches, in clear violation of the National Voter Registration Act…Kobach intends to check voter registration data against the SAVE (Systematic Alien Verification Entitlements) database to determine whether non-citizens are on the rolls despite the fact that the Department of Homeland Security has clarified that this is not an accurate database for updated citizenship records.

The administration remains convinced that voter fraud, despite the lack of any evidence of its existence, is a major threat to American democracy. If trust were not an issue, the commission’s effort to look again at the issue would be perhaps wasteful, but not viewed with the fear and suspicion. That the commission is led by individuals who have been actively working to challenge voting rights and make it harder to vote makes it very hard to trust their words. That they appear to be ignoring the vulnerability of our voting systems to manipulation by hackers and the possibility of foreign interference adds to the concern of those now speaking to against their work. Both Pence and Kobach have troubling histories in this area; this fear is well-grounded and the spotlight needs to remain focused on the commission.—Marty Levine