Matt Damon Refuses to Go to the Bathroom on Principle 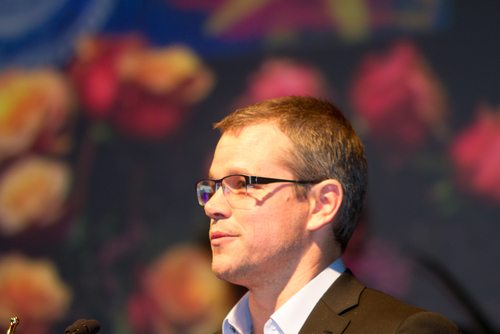 Actor Matt Damon says he isn’t going to the bathroom. In a YouTube video that has drawn more than 100,000 views in its first two days, Damon says that, in order to draw attention to the global water crisis, which leaves an estimated 780 million people without access to clean water, he is refraining from going to the bathroom. Exactly what that means is part of the subject matter raised in the three-minute YouTube video, which you can watch here:

In addition to putting the water shortage on the radar screen of some who may not have previously known or thought much about it, the video also raises the profile of Water.org, a charity co-founded by Damon that aims to realize “the day when everyone in the world can take a safe drink of water.” According to its website, Water.org plans to pursue that goal by “driving the water sector for new solutions, new financing models, greater transparency, and real partnerships to create lasting change.”

There are other high-profile efforts aimed at addressing the water crisis, including charity:water, which has received more than $4 million in funding from angel investors Michael and Xochi Birch. WaterAid, Global Water, and Thirst Relief International are among the dozens of other nonprofits working on this important issue. A more comprehensive list is available here.

It seems Water.org has, at least for now, raised the issue’s prominence in the U.S. due to the powerful forces of humor and celebrity, if the growing number of YouTube views and a solid smattering of media coverage is any indication. NPQ recently noted a similar effect when Ellen DeGeneres injected some humor into the debate over whether the Boy Scouts of America should remove its ban on openly gay members.

While these funny celebrity videos definitely draw eyeballs, we’d like to see more in-depth study of how many viewers/users are successfully converted into volunteers and donors from campaigns like Damon’s. Research from Geoff Livingston and Henry T. Dunbar conducted for PayPal suggests that nonprofits using celebrities to spread their message via social media might do well to pick the celebrities that are most likely to remain engaged in the issue as opposed to just going for the biggest names.

Is any awareness good awareness, or do you think a funny video about the water crisis could also have an unintended effect of downplaying the seriousness of the problem? And on a lighter note, if you could have any celebrity speaking out about your nonprofit or your cause, who would it be and why? NPQ would love to hear your thoughts on any or all of this in the comments section below. –Mike Keefe-Feldman