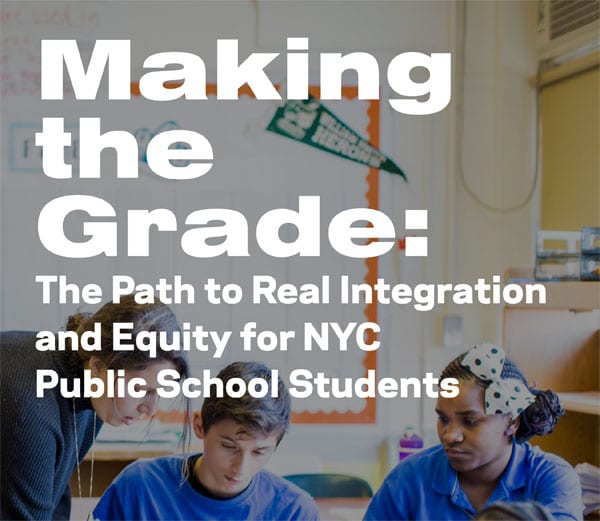 School districts are as segregated today, racially and economically, as they were before the Supreme Court told the nation that this was unconstitutional and had to change. More than a year ago, New York City Mayor Bill de Blasio appointed a School Diversity Advisory Group (SDAG) comprising more than 40 school, nonprofit, and community leaders to provide guidance on how his city should address the racial and economic segregation reality of its public schools. Earlier this week SDAG delivered its preliminary report and challenged the City’s leadership to make good on its promises that all of the city’s schools would reflect the city’s diverse population by taking steps that have, in the past, been politically very difficult to realize.

In the report’s introduction, the advisory group presents a stark picture of the challenge the city faces and of the reality of educational segregation in the heart of New York.

Sixty-five years since Brown v. Board of Education declared racially segregated schools unconstitutional, New York City has taken only very modest steps to live up to these challenges. In fact, a 2014 study by the UCLA Civil Rights Project found that New York State schools are the most segregated in the country—more segregated than the schools in Alabama or Mississippi. This fact ought to horrify every member of our proud city.

The Group’s goal is aggressive. Over five years, according to the New York Times, “Elementary and middle schools should reflect the racial makeup of their local school district, and high schools should look as much like their local borough as possible, in terms of race, income level, disability and proficiency in English.”

Currently, only 29 percent of schools are at or near the report’s defined goals.

This preliminary report recognizes that it’s best to begin where success is most easily achievable. For middle and elementary schools, the city is divided into 32 “districts,” and nine of these are seen as most ripe for moving toward full integration. But the report also addresses the needs of the students who will be left in difficult to integrate schools. As Richard Kahlenberg, a member of SDAG and director of K–12 equity and senior fellow at the Century Foundation, blogged,

The advisory group report includes a series of detailed recommendations around equitable resources, culturally responsive curriculum and pedagogy, restorative justice school discipline policies, and greater faculty diversity. These recommendations apply to all schools, whether they have successfully become integrated yet or not, and therefore many of them can be applied right away—and, we believe, should be.

The group also proposed naming a chief integration officer, adding diversity measures to the measures used to judge quality and improvement, and creating a task force to attack the problem of PTA fundraising, which currently allows affluent schools to differentially benefit their children.

More difficult issues have been deferred. According to ChalkBeat, these include “what to do about gifted and talented programs and selective admissions processes called screening…The report also steers clear of the mayor’s proposal to overhaul admissions at specialized high schools in a bid to better integrate them, an effort that has sparked intense backlash and prompted a lawsuit.” The group also “stopped short of pushing for any citywide mandates that would require parents to choose more diverse schools or school rezonings that would force more racial and economic integration.” The report also does not take on the implications for schools that fail to show progress toward integration.

The report goes beyond the moral imperative of integration and stresses the proven academic value of a diverse school system:

This supports Mayor de Blasio’s stated belief that change must come up from the bottom and his aversion to compulsory tactics. It also acts as a response to the political pushback that integration often brings out.

Will this report, written by an illustrious and well-intentioned group, become yet another that is presented with great fanfare, never to be heard about again? Or will it become the spark for real and sustained change? Let’s check back 12 months from now and see.—Martin Levine