EDITOR’S NOTE: To commemorate the fifth anniversary of the Haiti earthquake, we are reposting this podcast in cased you missed it the first time around. The concerns raised in this investigation remain to this day.

Doctors and nurses responded when Haiti was shaken by a deadly earthquake in 2010.

From across the United States and around the globe, an untold number of men and women took leave from their jobs and flew to Haiti to provide assistance to the injured.

In our latest episode, Tiny Spark takes a look at the quality of care those volunteers provided.  While they may have been well-intentioned, medical volunteers’ lack of specialized training would sometimes have severe repercussions for patients.

Harvard’s Dr. Stephanie Kayden says many surgeons who volunteered in Haiti had only ever worked in US hospitals, and didn’t think to bring along basics, like anesthesia. She tells us that there were grave consequences for patients when volunteer surgeons arrived unprepared:

We also speak to Andy and Jennifer Day, a couple from Indiana who decided to volunteer their medical skills in Haiti. The Days had never worked outside a US hospital before, which makes them pretty typical among the medical volunteers who went to Haiti. 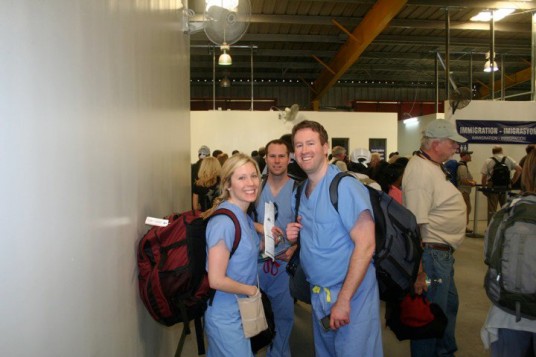 Jennifer, a registered nurse, says she was left to her own devices working at an orthopedic clinic in Port-au-Prince. “Really there was no one to tell you what you should be doing or how this clinic was supposed to be run.” She got there six weeks after the earthquake and says there was no system of record keeping for patients.

Jennifer’s experience highlights one of the central challenges of international emergency medicine. There is no central coordinating body to oversee the many medical volunteers who go to crises like Haiti’s. Teams and individuals are not required to sign up with a central authority or to be approved by one.

Dr. Richard Gosselin, a veteran humanitarian surgeon, says just about anyone could show up and start doing surgery in post-quake Haiti:

A report last year by Doctors Without Borders criticized the lack of follow-up care among medical providers in post-quake Haiti. “Many military and humanitarian groups left after a few weeks, leaving thousands of post-operative patients behind,” the report finds. The organization says its hospitals were “overwhelmed with patients who had been left without follow-up for their amputated limbs, wounds, and fractures.”

Dr. Henri Ford doesn’t want to make too much of the shortcomings in the medical response. The LA-based surgeon and Haitian native says he’s more interested in how to move forward. Ford is urging Haiti’s Ministry of Health to establish an emergency medical system and critical care hospital. He’s also working to develop programs to improve the quality of education for Haiti’s medical students. But Ford acknowledges that some of his well-intentioned colleagues made mistakes in the days after the quake:

But when Dr. Nadine Semer looks back at her time in Haiti, she says you have to assess and focus on where the medical response fell short. “It’s vital to look at the shortcomings, partially because if they takeaway is we went down there and look at all the good we did, we don’t know that that’s true. We think we did good but we don’t know that.”