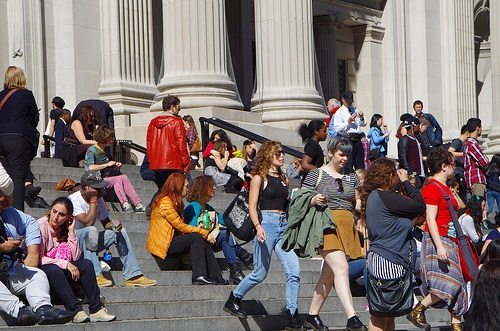 In the late 1800s, the Metropolitan Museum of Art came to an agreement with the City of New York that was meant to allow people of all incomes to freely enjoy its offerings. The museum leases its building for free and receives a subsidy from the city in return for open access (to include Sundays and two nights a week) that has evolved into a “‘pay what you wish,’ but we highly recommend $25 per person” policy that annoys many museumgoers.

Two of those museumgoers took their issue to court. The consolidated complaint charges that the approach is misleading; it reads, in part:

“Instead of providing free and open access to art for the masses, without regard to socio-economic status (as originally designed), the MMA has transformed the Museum Building and Museum Exhibition Halls into an expensive, fee-for-viewing, elite tourist attraction, where only those of financial means can afford to enter a publicly-subsidized, city-owned institution.”

But a New York appeals court found that independent citizens do not have the right to enforce or intervene in the agreement made between the city and the museum when both of those institutions are happy with the arrangement.

The attorney for the two plaintiffs, Andrew Celli of Emery Celli Brinckerhoff & Abady, indicates that the issue is not dead by any means. “The court ruled in a very narrow way that the plaintiffs did not have the right to enforce the lease or the statute, both of which require free access to the museum,” Celli said. “We continue to have a…case that is built around the idea that if the museum is free, it should say that it’s free and it should not use confusing language and small print to try and coerce people into making a contribution they shouldn’t have to make.”—Ruth McCambridge

More about: Arts and CulturePolicies and Laws