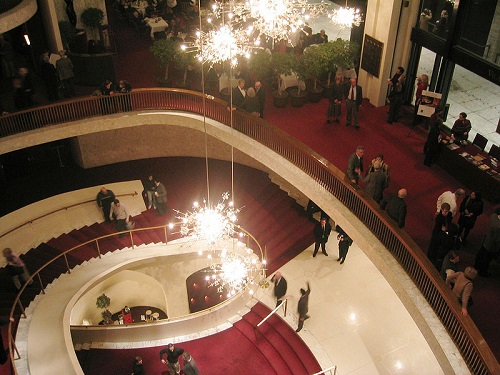 Three weeks ago, the 2014-15 season at the Metropolitan Opera was at risk of being compromised by a labor lockout, with management and all but a few of its 16 unions at odds and a July 31st deadline looming. At the 11th hour, a federal mediator was called in to keep talks going between the Met and two major unions. That led to an independent financial analysis of the $325 million operation and an extension of the contract deadlines. As we reported Monday, two critical pieces fell into place over the weekend when the Met reached agreements with the American Guild of Musical Artists and Local 802 of the American Federation of Musicians. At 3:15 this morning, when an agreement was reached with Local 1 of the International Alliance of Theatrical Stage Employees, the storm cloud of a lockout seemed to dissipate, with Met management stating that “preseason rehearsals and preparations for the 2014-15 season will continue without interruption.”

Details of the agreement with the union representing stage hands, carpenters and electricians were not immediately made available, but the Met said the agreement would yield savings comparable to those achieved with the two other unions. Members of all three unions still need to ratify the agreements, and the Met still needs to reach contract agreements with eight of its smaller unions, although with the larger ones on board, those settlements seem to be within reach.

Underlying the labor disputes was a ballooning operating budget, fueled in part by rising labor costs and falling box office revenues. Aggressive fundraising and increasing reliance on the Met’s endowment kept the company afloat in recent years, but general manager Peter Gelb had insisted that the unions would have to make concessions for the organization to stay in business. The unions have for months been accusing Gelb of overspending on elaborate new productions—not a typical complaint from the artistic side of an opera house. The board, meanwhile, has pledged to begin a campaign to double the Met’s endowment, but only if expenses could be cut.

And cut they will be—to the tune of about $90 million, with labor and management sharing more or less equally in the savings, at least according to the terms of the two agreements hammered out over the weekend. The American Guild of Musical Artists (chorus, singers, stage directors and others) and Local 802 of the American Federation of Musicians (orchestra) agreed to four-year contracts that include the first pay cuts in decades for unionized workers at the Met. Those unions agreed to an immediate 3.5 percent wage cut, with an additional 3.5 percent reduction in six months; the second cut might be in wages or might be in the form of a negotiated change in benefits. In the second half of the final year of the contract, workers would receive a 3 percent raise. While Gelb had initially asked for 16 or 17 percent wage cuts, both sides seem satisfied with the compromise. Ongoing independent financial analysis of the company’s finances was also included in the two contract agreements announced on Monday, presumably as a means of keeping the peace and ensuring that management and labor continue to jointly shoulder the cost-cutting measures.—Eileen Cunniffe