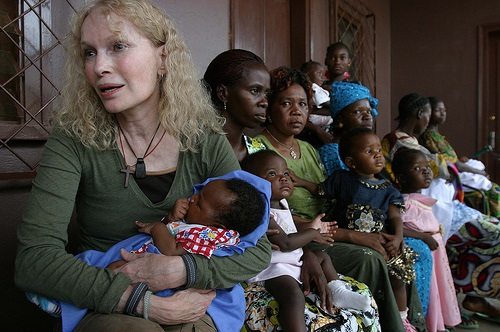 The world witnessed a significant achievement in international relations with last week’s United Nations Security Council agreement to remove and destroy Syria’s chemical weapons arsenal. Some critics suggest that the agreement removes Bashar al-Assad’s ability to kill Syrians with sarin gas, but he is still free to continue adding to the country’s death toll through conventional means and, more recently, mass starvation.

Be that as it may, Assad’s alleged crimes against humanity have not yet given him a ticket to the International Criminal Court in the Hague (a difficult issue for the U.S., since this country doesn’t recognize the authority of the ICC), but Sudan’s Omar al-Bashir has been invited to stand in docket for his continuing genocidal attacks against civilians in the Darfur region, a 10-year campaign by the Sudanese strongman against non-Arab Darfurians.

In an op-ed in the Wall Street Journal, actress Mia Farrow and author Daniel Goldhagen take President Obama to task for his 5,000-word speech at the United Nations General Assembly that discussed controversies and conflicts in North Africa and the Middle East, but never mentioned the continuing inhumane policies of Bashir in the Sudan.

Farrow and Goldhagen remind us that presidential candidate Obama had said on the stump that the silence of the West about the Sudan would be “a stain on our souls.” They now charge that “President Obama has joined that silence.” They describe his Sudan policy as “his most tragic foreign-policy failure: standing by as Sudan’s Islamic regime perpetrates a slaughter against its own citizens.” They point out that President Obama was willing to justify a U.S. intervention in Libya in humanitarian terms—“to prevent a bloodbath”—even though there was no evidence of a mass slaughter of civilians comparable to Sudan’s—or, for that matter, Syria’s.

Farrow, along with actors George Clooney and Don Cheadle, protested loudly the possibility that Bashir would show up at the UN General Assembly meeting last week, which, had he come, would have made him the first visiting head of state to attend the General Assembly with an outstanding ICC warrant still current calling for his arrest, but Bashir cancelled anyhow. Identifying herself as a UNICEF Goodwill Ambassador, a title she has held since 2000, Farrow signed a letter opposing Bashir’s potential trip to the U.S. Along with actress Ashley Judd, Farrow is a non-resident senior fellow of the anti-genocide Enough Project, an initiative created and sponsored by the Center for American Progress, but her nonprofit bona fides are beyond affiliation with specific activist nonprofits.

Farrow has her own website on which she provides resources on issues in Sudan and other countries and links to other organizations opposing genocide in the Sudan and elsewhere. She’s virtually a one-woman nonprofit institution, with a level of dedication to the children of Darfur that is striking. Bashir might not have had trouble with President Obama had he come to the U.S., since the U.S. was unlikely to hand him over to a body like the ICC that it refuses to recognize. We suspect that Bashir bugged out of the General Assembly because he might be apprehended not by U.S. police, but by Farrow herself.—Rick Cohen