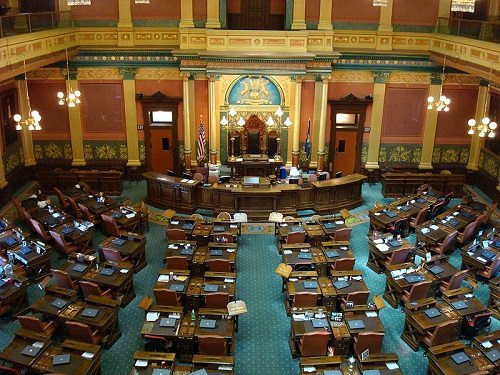 The complexities of helping Detroit deal with its bankruptcy are difficult to follow for those of us not watching developments on a day-to-day basis. It seems, however, that the state legislature is taking some major steps toward making the “Grand Bargain” that would save the Detroit Institute of Art’s collection from being sold off to help finance the city’s public pension obligations.

Yesterday, the Michigan House of Representatives voted to appropriate $198.4 million as part of a package of 11 bills that established how the state would support and oversee Detroit’s emergence from bankruptcy and the protection of the DIA collection. For the main bill that spelled out the rule for the state’s oversight of Detroit in the bankruptcy deal, all Republicans voted in favor, along with 43 of the 50 Democrats. The “no” votes came from legislators who were concerned about the expansion of state control over Detroit.

One of the 11 bills, however, got 44 “no” votes along with a strident denunciation by the DIA. That bill prohibited the DIA from seeking a renewal of or a new millage assessment on regional taxpayers that had been a stable source of revenue for the museum since 2012. In 2012, the taxpayers of Wayne, Oakland, and Macomb counties had approved a property tax increase that would generate substantial, predictable revenues. In return for the millage, the museum gave free admission to residents of the three counties and expanded its education and outreach programs.

The current millage structure generates some $23 million annually for the museum. As part of the Grand Bargain, which includes $370 million from a collection of local and national foundations, the DIA is committed to put in $100 million over 20 years. The millage deal expires in 2022, causing museum administrators obvious concern about their ability to continue their operations and simultaneously raise the museum’s $100 million for the bargain. From the legislators, the message is that the millage was scheduled to end in 2022, so they were going to hold the DIA to that timeframe in return for saving the collection from being parceled off to pay for the pension obligations.

“It really does put a lot of pressure on the museum,” said Jeffrey Abt, a Wayne State University professor and author of a book on the DIA’s financial history. “Any shortfall in fundraising and they’ll end up exactly where they were before the millage, which was facing possible closure.”

The opposition to the bill includes legislators who noted that the 2012 millage rule was approved by the voters of the three counties. The bill in the 11-bill package essentially has the state telling those three counties that they cannot choose to include an extra tax on their own to support what they see as a regional cultural asset. The original language would have apparently prohibited millage deals for any museums, but was amended to specify only the DIA.

Although Governor Rick Snyder got all of his Republican compatriots in the House to support the core of the deal, he faced powerful opposition. Americans for Prosperity, chaired by David Koch, announced its opposition to the $198 million state infusion into Detroit. Scott Hagerstrom, the director of the Americans for Prosperity chapter in Michigan, described the idea of giving state money to the Detroit deal as “very toxic, especially to out-state and Republican, conservative-leaning individuals.” On its website, AFP posted this message: “Tell Lansing politicians that Detroit has gotten enough of our tax dollars…More money can’t fix Detroit.”

AFP plans to spend a lot of money in the 2014 elections in Michigan and elsewhere to pursue its ideological agenda and push Republicans to the right. While there are plenty of legitimate questions about elements of the overall plan to save Detroit—including the DIA’s about the millage—the AFP’s opposition to a plan that has a majority of Democrats and Republicans working together may well help solidify their bipartisan funding partnership for the troubled city.—Rick Cohen