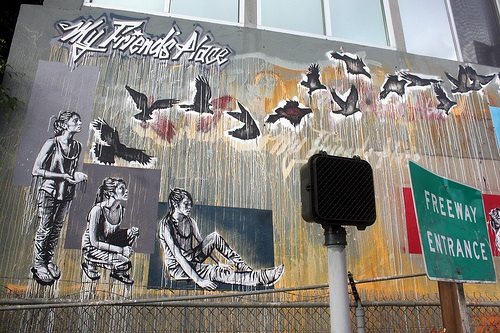 This tells you the potential power of celebrity philanthropy. Some of us at NPQ aren’t generally avid viewers of the MTV Video Music Awards—in this writer’s case, due to his inability to remember where he last put his ear horn, but we missed Miley Cyrus’s feint toward philanthropy when she pulled a Marlon Brando at this year’s VMAs. Remember when Brando accepted his Oscar for The Godfather by sending Sacheen Littlefeather in his place? In Brando’s case, he was known among Indians as a serious philanthropist and advocate for Native American communities and causes. Cyrus chose not to twerk her acceptance of a VMA award (she’s officially given up the act), but to send a young homeless man in her place, 22-year-old Jesse Helt.

“I am accepting this award on behalf of the 1.6 million runaways and homeless youth in the United States who are starving, lost, and scared for their lives right now,” Helt said as he accepted Cyrus’s award. “I know this because I am one of these people.”

According to the AP’s Steven Dubois, Cyrus met Helt at My Friend’s Place, a facility for homeless youth from the streets of Hollywood. Cyrus connected with My Friend’s Place through her association with Trevor Neilson, the president of G2 Investment Group and co-founder of Global Philanthropy Group. My Friend’s Place, well connected in Hollywood television and film circles, counting execs from Lionsgate, Disney, and the Game Show Network, plus Hollywood lawyers and agents, on its board, is making the most out of its connection with Cyrus, with multiple references on the organizational website’s front page to her visit to the facility and her support.

A Lexis-Nexis search for “Miley Cyrus” and “homeless” for the past week generated 670 hits, though a Google search shows thousands. Having Cyrus connected with a homeless program certainly boosts that one facility’s profile. Reportedly, donations have begun to flow into My Friend’s Place as a result of Cyrus’s VMA action.

For Helt, the story is a little different. After his VMA appearance, Helt turned himself in to the police in Dallas, Oregon, due to an outstanding warrant and posted bail of $2,500. According to Dubois, Helt had “pleaded guilty to misdemeanor criminal mischief and criminal trespass several years ago after breaking into the apartment of a man he believed to be selling bad marijuana,” but was wanted for having violated probation. According to Helt’s mother, Cyrus has volunteered to pay Helt’s legal fees. A few sources report, relying on rumor, that Cyrus has even invited Helt to live with her.

This is a little like the other side of the ice bucket challenge. In this case, Cyrus has, either through her own effort or the intermediation of Neilson, actually interacted with My Friend’s Place and the homeless people the organization serves. She has clearly interacted with Helt and gone the extra mile of helping him personally and directly, unlike some of the ice bucket aficionados who were at best vaguely aware of ALS and might not have ever met someone suffering from the disease.

On the other hand, reports are that Cyrus’s channeling of the Brando award-acceptance technique is really a “reinvention” crafted by her mother Tish and a “team of advisors” to upgrade her image after the criticism she got for her foam finger twerking performance at last year’s VMAs. Is her concern for homeless youth simply a new set of philanthropic clothing draped over her sex-symbol ensemble? Or has Cyrus developed a real commitment to doing something about the homeless, even beyond her willingness to help Helt personally through his legal problems? When the news about Helt’s arrest hit the press, Cyrus rather admirably stepped up to defend him on Twitter (though we cannot conclude whether Cyrus herself or a representative posted these comments on her Twitter account):

While they obsesses over one homeless mans legal issue lets help the other 1.6 million homeless youth http://t.co/VE6P9yfAVX

The media never fails to disappoint. You’ve chosen to go after Jesse instead of covering the issue of youth homelessness 🙁

Does looking down upon the homeless help people excuse their inaction?

I hope that this can be the start of a national conversation about youth homelessness and how to end it.

If some portion of the 18.5 million followers of Cyrus’s Twitter account gather some perspective on homelessness—not everyone’s favorite charitable cause or constituency—and even understand, through her defense of Helt, that the homeless are sometimes in tough straits which do not diminish the legitimacy of their plight, that could count for something. The key, unlike a one-time charitable splash, is whether Cyrus continues, as Brando did with his commitment to Native Americans, her commitment to address the challenges facing homeless youth, both in Hollywood and beyond.—Rick Cohen