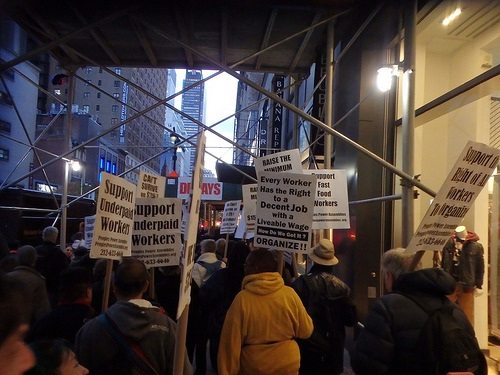 Hopefully, nonprofits are on the side of raising the minimum wage in their states and ensuring that their own employees are beneficiaries. This year already, five states—Connecticut, Delaware, Maryland, Minnesota, and West Virginia—and the District of Columbia have increased their minimum wage levels above the federal minimum of $7.25 an hour. That means more than half of the states will be above the federal minimum wage. Other states with increases progressing in their legislatures include Hawaii, Illinois, Massachusetts, and Vermont.

It’s not just states. Cities are enacting their own minimum wage standards, sometimes because Republican governors or legislatures have nixed state-level measures. The National Employment Law Project reports that 120 cities have legislated their own minimum wage levels higher than either state or federal levels, including San Francisco and San Jose in California and Montgomery County and Prince George’s Counties in Maryland.

In some cases, these proposed minimum wage increases have put some nonprofits into a quandary. Seattle is contemplating a raise in its minimum wage to $15 an hour, which prompted the Seattle Human Services Coalition to poll its nonprofit members on the potential impacts of a higher minimum wage. The survey report noted that “one organization that provides critical mental health, shelter, day, and hygiene services as well as meals for hundreds of people in Seattle estimated the cost of $1,000,000 annually to bring all employees up to a $15/hour minimum wage and maintain current services.” The report noted that the proposed minimum wage increase could impact 209 employees of another multi-services agency in the survey. Twenty-one of the 29 respondents indicated that without offset funding, they would have to reduce services or shut down with the higher minimum wage.

In a separate commentary in the Seattle Times, Sylvia Furstenberg from The Arc of King County raised those concerns as well as the problem of equity adjustment costs to compensate employees currently above the $15/hour level, who would see the increases of workers below their salaries as indicating that their previously higher pay levels were no longer reflective of their higher value to the organization. Tallying up all the problems, she wrote, “We cannot achieve shared prosperity by passing a plan that risks putting nonprofits out of business, leaving vulnerable citizens without support.”

Conservatives quickly latched on to the SHSC report as evidence that nonprofits paying low wages are in roughly the same position as minimum wage restaurants and retailers, forced to reduce employment (or services) in the wake of a minimum wage increase. They failed to report, however, the opening line of the SHSC report:

“The Seattle Human Services Coalition recognizes the importance of a livable minimum wage in addressing poverty in our community. SHSC fully supports raising the minimum wage for all human services workers (and others) to $15/hr.”

Nonprofits are a diverse lot on the issue of wages. For example, Department of Labor rules generally do not allow unpaid internships for for-profit employers, but the Department hasn’t been particularly vigorous in enforcing the rule. In some cases, it is because the interns themselves are reluctant to complain, fearing that it might jeopardize their future job prospects. However, with about 38 percent of the unpaid half-million interns working for for-profits, it is striking that 13 college presidents, including John Sexton of the nonprofit New York University, wrote to the Department of Labor as soon as the unpaid internship guidelines were announced, asking the Department to reconsider plans to step up enforcement of the law. Although violations of the law, the unpaid internships with for-profits represented something that the nonprofit colleges and universities were encouraging. If unpaid internships with for-profit employers sought by nonprofit educators and subminimum wage levels for some nonprofit employees sought by nonprofit service providers become the norm, it could turn into a “parade of horribles” of exemptions that undermine the principles and purpose of minimum wage laws.

Will nonprofits support increased local and state minimum wage statutes in public and behind the scenes? Or will they say that boosting the minimum wage without a commensurate increase in public funding to pay for increased service costs means that nonprofits cannot absorb and therefore cannot fully support the measures?—Rick Cohen