Money and Politics Creep into a Nonpartisan School Board Election 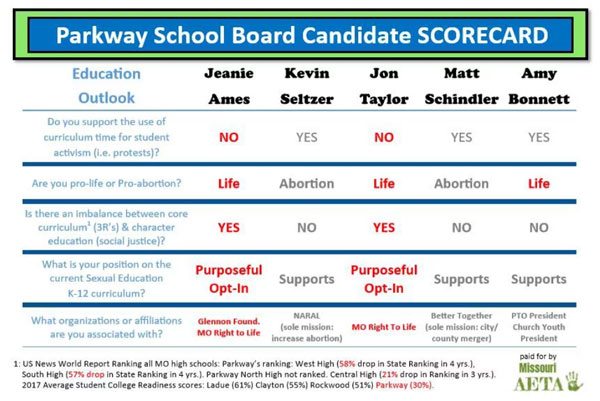 When does a nonpartisan schoolboard election become partisan? And what kind of impact can such a race have on the future decisions and directions of that board and the school district? This may all be playing out in real life in the Parkway School District in St. Louis County, Missouri. On Tuesday, April 3rd, voters will elect two candidates, five of who are running for open positions on the Parkway school board. But this is not your ordinary school board race with candidates presenting their views on budgets and expenditures and curriculum changes. Instead, it has become a highly politicized campaign due to an influx of funds, and no one really knows who these groups are or how much money is being spent. As Kristen Taketa writes in the Post-Dispatch,

A secretive group that calls itself an advocate for taxpayer accountability and transparency is turning what’s supposed to be a nonpartisan Parkway School Board election focused on students and education into a politicized campaign.

Moreover, it’s essentially impossible to learn how much money the group is spending on this election. It is organized under the same 501c4 nonprofit model that Gov. Eric Greitens and other politicians have used to benefit from dark money. Under that model, a corporation does not have to disclose its donors or how much money it raises or spends.

This group, called Advocates for Educating Taxpayer Accountability, also known as Missouri AETA, says it advocates for “appropriate educational policies.” Postcards produced by AETA purport to show the views of each Parkway School Board candidate on abortion, as well as the use of class time for student protests, the district’s sex education curriculum and other topics. Missouri AETA called these materials “scorecards.”

These scorecards highlight in red many positions of two of the five candidates on the questions asked. The three other candidates claim to have never been asked by Missouri AETA for their views on these questions. The two highlighted have gone further, declaring themselves to be “conservative” candidates. (One stated she wants to be the “pro-life conservative” on the board; she even uses the Republican elephant logo on her yard signs.) One might wonder what these issues have to do with a nonpartisan school board election and what would bring outside funders to campaign for school board candidates in this Missouri community.

The fact that school board elections in Missouri are nonpartisan may be at the crux of this influx of secretive money and politics. NPQ has written frequently on the influence of dark money in political races, particularly where schools are involved (2016, 2018), and the push is almost always to gain more conservative control at the local level.

“It encourages people to come at school issues based on what is best for students in the school district, and not for a particular political agenda,” he said.

While no law forbids nonpartisan candidates from advertising their political beliefs, bringing issues such as abortion into a school board election is inappropriate because such issues have nothing to do with a public school board’s duties, said Kenneth Warren, a political science professor at St. Louis University.

Bringing money and politics into this school board election has caused concern that the focus is not where it should be, on what is best for students and their education and which candidates will be the best stewards of the taxpayers’ dollars. Outgoing school board president Beth Feldman, who has served Parkway for 10 years, stated “The thing that bothers me the most is the lack of emphasis on the well-being of students…That’s not what people are talking about, and that’s what being a school board member is about.”

A great deal of this election seems to turn on positions taken by the school board on sex education and how the board chose to address LGBTQ issues and curriculum over two years ago. With the entry of “new” groups and new funding sources like Missouri AETA, the focus has been shifted to these issues and partisan perspectives and away from the “real” school board functions on which the majority of those who are elected to serve will spend their time.

Missouri AETA calls for transparency, but the group itself is cloaked in secrecy. It includes no names of leaders or members on its website. The candidate “scorecards” that Parkway residents are getting indicate that they are paid for by Missouri AETA. But the materials include neither the name of the principal officer of the group nor the mailing address for the group, as required by state law. The postcards include an address, but it is the address of a UPS Store in Chesterfield, Missouri.

Serving on a school board is often seen as a selfless act of giving of countless hours to secure the best education for all children and put the taxpayers’ funds to best use for the community that elected you to serve. The impact of politics and the influence of outside funds can skew the real work of a board and the results can have ramifications for years to come. On April 3, 2018, the voters in the Parkway, Missouri school district may show us just how much influence money and politics can have in a nonpartisan election and on the future of the functioning of this school board.—Carole Levine