A Monumental Task: Challenging Assumptions about Who and What We Honor in Public Spaces

Although controversy has for some time been swirling around statues in U.S. cities—particularly in the South—that represent Confederate leaders, the violence that erupted in Charlottesville last month accelerated dialogue, and in some cases led to decisive action. Philadelphia, which, as Next City notes, was never part of the Confederacy, nevertheless jumped into the fray as civic leaders seized the moment to ask (not for the first time) if a towering bronze likeness of former mayor Frank Rizzo, whose complex legacy as a police officer and then commissioner at a time of intense racial tension, ought to remain on public property. Even as that question continues to simmer, two distinct, long-planned Philadelphia monument projects serendipitously went public this month: 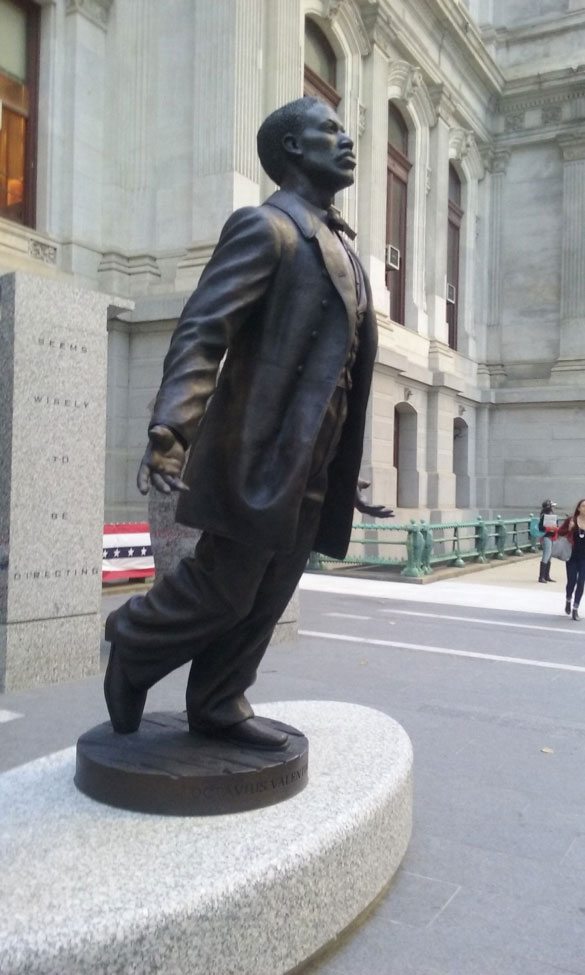 Philadelphia, it seems, is having a monumental moment.

Philadelphia is a city full of monuments and memorials. Philadelphia is also a city full of monumental histories, many of which are little known, obscured, or simply unacknowledged. These underrepresented histories often exist in tension with officially acknowledged narratives. The projects that make up Monument Lab address issues of social justice and solidarity, including matters of race, gender, sexuality, class, and national belonging. The monuments proposed through this exhibition are made of stone and bronze, as well as recycled materials, images, sounds, and the byproducts of community process.

The monument to Catto, who was an educator, an athlete, and an organizer who helped to desegregate the city’s streetcars and pushed for equal voting rights for blacks, has been talked about for decades. It was finally realized in part because former city councilman and current mayor Jim Kenney spearheaded a 15-year-long campaign to memorialize the largely forgotten activist. Catto was shot to death in 1871 at the age of 32 by a white Irish Catholic on the first election day after the 15th amendment was passed, giving black men the right to vote. Kenney, who is also Irish Catholic, called Catto “a true American hero” at the ceremony on Tuesday. In one report on the monument’s unveiling, Kenney is quoted as saying, “We know more about Rocky [Balboa]—who’s not even a real person—than we know about Octavius, which says a lot.”

Kenney also said this of Catto:

Like many other unknown and nameless black American heroes, he should be revered, honored and recognized. Their lives and accomplishments should be part of the daily curriculum in our schools, not just during the shortest month of the year…My hope is that someday, every child in Philadelphia will know as much about Octavius Valentine Catto as they do about Benjamin Franklin, George Washington and Dr. Martin Luther King, Jr.

While the Catto monument is completely separate from the Monument Lab project, it is now part of a fascinating trio of public art pieces within the immediate vicinity of City Hall, which are, in a very real sense, in dialogue with each other—at least for now—and among the city’s liveliest photo and selfie sites: 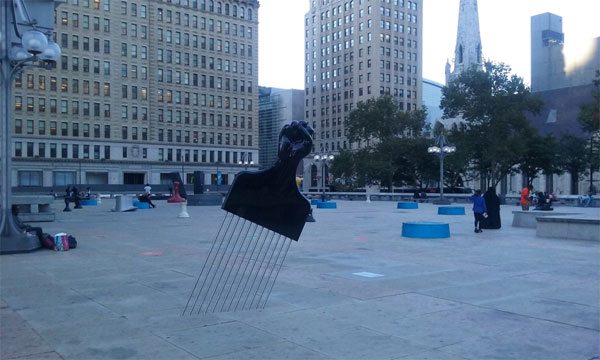 The Monument Lab projects are on display through November 19th, so whether Rizzo stays or goes, the juxtaposition with Thomas’s work is only temporary. But Octavius Valentine Catto—he has at last taken up his rightful place in the shadow of City Hall, and it looks like he’s there to stay.—Eileen Cunniffe