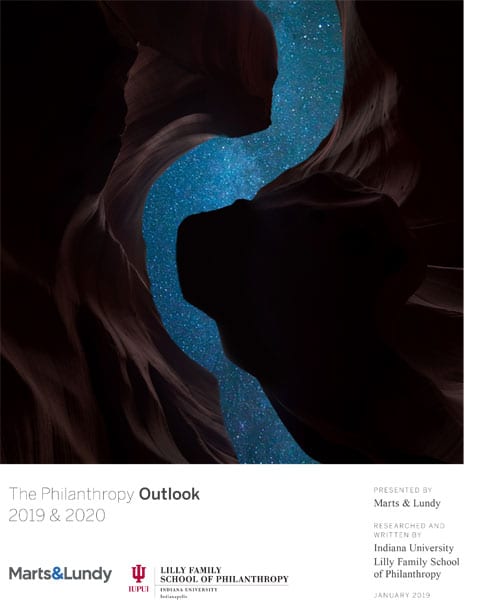 Yesterday, the IUPUI Lilly School of Philanthropy and Marts & Lundy released a charitable giving prediction for the next two years in The Philanthropy Outlook. It projects a continuing high rate of overall growth despite last year’s broad predictions about the chilling effect of the changes in tax law.

Here, we do only the most general of coverage as a placeholder, but we have to admit that even its cheerier figures have an underlying note of caution. As reported in the project’s press release, the study’s key findings include:

But the report paints three potential scenarios that flirt with disaster. These scenarios remind us of Dr. Paul Light’s “Four Futures” predictions from 2008, though they are less vivid than his. We urge a rereading of Dr. Light’s article in light of the tense economic tenderness of the moment. This study’s three scenarios are as follows:

So, like yesterday, what we present to you today remains inconclusive as to giving in our immediate future, but we will continue to cover the story as it unfolds, including a deeper look at this report in the future.—Ruth McCambridge