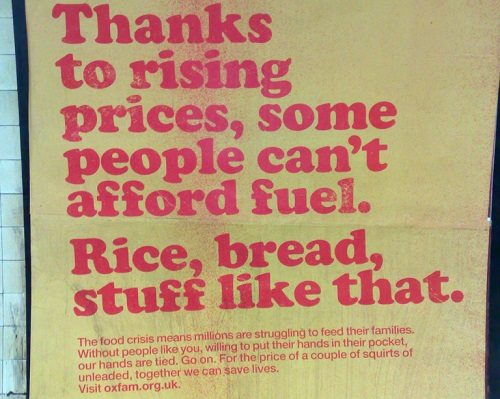 For most Brits and many others around the world, international aid charity Oxfam is an institution. Its roots were a group that campaigned in 1942 to send food supplies through an Allied naval blockade to starving women and children in enemy-occupied Greece during the Second World War. It became an international federation in 1954, implementing long-term development programs in vulnerable communities.

Yet it has attracted the ire of a section of the British government for a recent campaign, launched with a tweet, highlighting poverty closer to home.

Lifting the lid on austerity Britain reveals a perfect storm – and it’s forcing more and more people into poverty. pic.twitter.com/2MzzyMXcsU

The campaign features a film poster showing a roiling sea under dark storm clouds. In red, the faux title: “The Perfect Storm.” Above the image, the tweet says, “Lifting the lid on austerity Britain reveals a perfect storm—and it’s forcing more and more people into poverty.”

A government MP has attacked back, writing to the Charity Commissioner, the UK Nonprofit regulatory body, saying, “This [campaign] is overtly political and aimed at the policies of the current Government.”

Oxfam is not alone in apparently attracting the anger of the government. The Trussell Trust, a food bank operator, has said it, too, was warned by “someone in power” to stop attacking the benefits system or “the Government might try to shut you down.” This anger, or what could be excessive sensitivity by the government, follows the release of a joint report by Oxfam, the Trussel Trust, and Church Action on Poverty that says there has been a dramatic increase in demand for food banks and charitable help in the UK, with more than 20 milllion meals provided in 2013—a 54 percent increase on the previous year.

Meanwhile, the Panel on the Independence of the Voluntary Sector has been hearing from the Trussell Trust and others that maintaining an independent voice can be uncomfortable but the charities must push back against criticism. The Panel was set up precisely because of the need for charities to speak up on behalf of the disadvantaged. At the time of its founding in 2011, its Chair said, “That does not always make it the most comfortable partner for governments: offering challenges to received wisdom, championing those who are marginalised or unpopular and exposing gaps in provision.”

For good measure, notes The Telegraph, MPs attacking Oxfam have also accused it of overpaying its directors and having “an anti-Israeli leftist agenda.” It has not passed without notice either that senior members of the opposition Labour Party have been closely affiliated with the charity.—John Godfrey