Naming Rights to a Tampon? A Pat of Butter? A Fundraiser Extraordinaire

NPQ is periodically blown away by a great fundraising idea, and this project described in the New York Times is well worth examining for its wonderful and thorough design.

Urban Ministries of Durham, a homelessness organization in North Carolina, is making gentle fun and some real bucks in a campaign that offers naming rights for such mundane stuff as sugar packets, pats of butter, and napkins—you know, the kind of stuff it takes to actually run a program for roofless people. In all, there are 169 items on the project’s website ready to be named. The small stuff is priced at $1, but if one wishes to name a chef, shelter monitor, receptionist or case manager, a donation of $25,000 will be required.

The campaign is called Names for Change and was the brainchild of McKinney, an agency that has worked pro bono with UMD for four years. The project, which started with a goal of $50,000, has raised $41,000 to date and has upped its goal to $100,000. It uses a special website, namesforchange.org, and social media that includes Facebook and Twitter.

The copy is straightforward: “Connecting everyone who comes through our doors with food, shelter and a future requires a whole lot of stuff. It’s not sexy stuff. But it’s important stuff.” 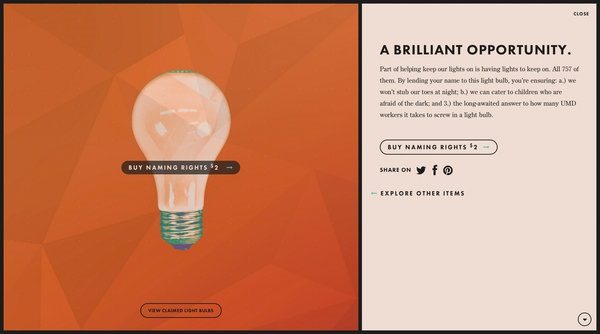 Donors receive personalized certificates that can be shared in social media, emailed, or printed as posters and shipped. The certificates are written in flowery language; for example, a donor of a teddy bear, priced at $30, is feted for providing “The (insert name) teddy bear of comfort,” which is “fearlessly fighting homelessness at UMD.” Likewise, a donor of a can of fruit cocktail, priced at $2, is honored for providing “The (insert name) fruit cocktail of tasty delights,” which is also “fearlessly fighting homelessness at UMD.”

Finally, even when a donor does give, the organization stays in contact and, in a friendly way, “upsells” you to three other items.—Ruth McCambridge