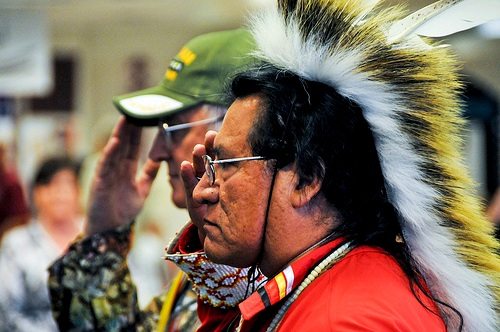 The host of the Oklahoma-based NPR program, Indian Times, Susan Shannon reports that nonprofit advocacy organizations representing Native Americans are displeased with how Indian Country cases have fared recently at the U.S. Supreme Court. As a result, the Native American Rights Fund, represented by executive director John E. Echohawk, and the National Congress of American Indians (NCAI), with Jefferson Keel as president, have come together to create the Tribal Supreme Court Project.

This is a full circle return for these organizations. Back in the 1970s, when NARF was founded, Indian tribes and Indian interests were doing well at the Supreme Court, but now Echohawk reports that three out of four Indian law cases that go to the SCOTUS have “resulted in significant losses.” The approach that Echohawk outlined involves his organization and NCAI working “with tribal attorneys and tribal leaders and Indian law professors and Supreme Court practitioners across the country on each of these cases as it approached the Supreme Court or gets accepted by the Supreme Court…to help the parties involved come up with the best approach, the best arguments that all of us can help put together.”

Echohawk is concerned, however, that “basically any issue headed for the Supreme Court is probably not going to be decided in favor of the tribes.” As a result, NARF and NCAI are advising groups “to stay away from the Supreme Court if at all possible.”

Another problem is the composition of the SCOTUS and lower federal courts. Shannon’s article notes that SCOTUS justices John Roberts and Samuel Alito “have never voted pro-Indian.” Echohawk reports that when there was an opening on the federal bench, the Project supported Obama nominee Arvo Mikannen, a Kiowa attorney from Oklahoma, but Senate Republicans blocked his confirmation.

The KGOU article implies that one of the big areas of contention for Indian interests at the Supreme Court concerns cases involving the interpretation of the Indian Gaming Regulatory Act, notably the pending Michigan v. Bay Mills Indian Community case. In an op-ed in early September, Keel and Echohawk together argued that the Bay Mills case has been expanded to be “a full frontal attack on tribal sovereign immunity and the authority of states to regulate ‘gaming activity’ under the Indian Gaming Regulatory Act,” when it should really be a more limited case on the merits of the tribe’s ability to conduct gaming on land that it has acquired with Michigan Indian Land Claims Settlement Act Funds outside of the boundaries of its reservation—in this case, more than 100 miles away.

Because Michigan is challenging “the doctrine of tribal sovereign immunity and the authority of states under IGRA,” Echohawk and Keel write, “this case has become high-stakes litigation for Indian tribes across the country.” Because of the broader scope of the case, Michigan is getting substantial support from other states and amici from non-Indian property rights groups.

Indian gaming is a very difficult and contentious issue, generating lots of passions and argument. The Bay Mills case comes up for oral argument at the Supreme Court on December 2nd. How narrowly or how broadly the court reviews the issues here will be important for the advice the Tribal Supreme Court Project offers in the future.—Rick Cohen