A recent report by the Center for Juvenile and Criminal Justice reports that Native Americans are killed by police at a higher rate than any other ethnic group.

As with African Americans, these killings are not isolated from the larger problem of police and societal violence, as this devastating article in Counterpunch discusses in the particular context of New Mexico, which in 2014 had the highest rate of police killing in the country. That article reports that “according to a 2003 study by the New Mexico Advisory Committee to the U.S. Commission on Civil Rights, Native people experience ‘acts of ethnic intimidation; threats of physical violence, assaults, and other potential hate crimes’ as part of everyday life in border towns like Gallup, Farmington and Albuquerque.” 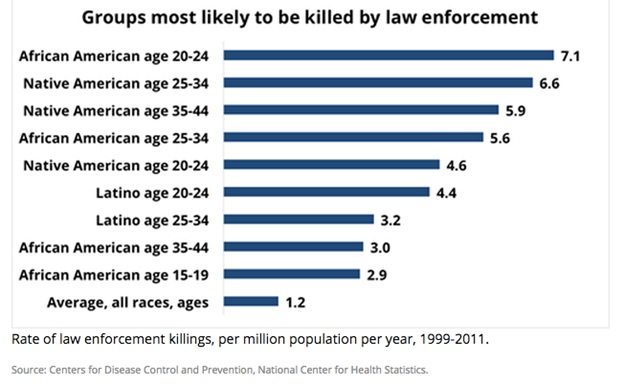 Chase Iron Eyes is an attorney with the Lakota People’s Law Project in South Dakota, which published a report called “Native Lives Matter” early this year. He says that the DOJ needs to address police violence against Native Americans.

“You can tell they’re shooting out of fear,” he said. “If it’s not out of hate, for some reason they’re pulling the trigger before determining what the situation actually is. Something does need to happen. Somebody does need to take a look and we need help.”—Ruth McCambridge