New Boston Public Art Installation Astounds, Reminds Us Where the Ocean Is 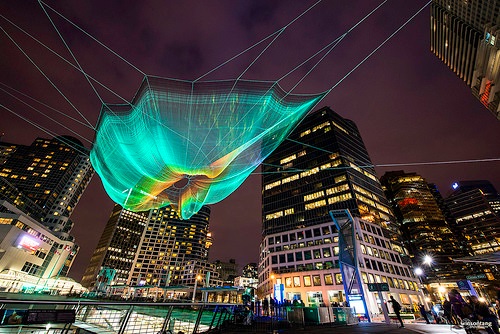 Public art is supposed to disrupt our states of mind, and very close to the place where the Boston encampment of Occupy could have been found three and a half years ago, an eerie hovering of light hangs, brightly colored and wafting around in the breeze.

The artist is Janet Echelman, and her two-thousand-pound aerial rope sculpture stops people in their tracks when they first catch sight of it above the Greenway parks, where you can hear the seagulls and the boat horns through the sounds of the traffic. Up close, you see it is a suspended sculpture made up of huge nets that change with the light and the wind, like almost everything else in this city. You can read some of the details about the piece here, but here is how it is described in a local community paper:

“When any individual element of the sculpture moves, every other element is affected. Enormous in scale and strength but as delicate as lace, the fibers used are 15 times stronger then [sic] steel but are extremely lightweight.”

The Rose Fitzgerald Kennedy Greenway is meant in part to reconnect Boston to the ocean, and this sculpture—even suspended as it is between tall buildings—calls to mind the familiar but wild and harsh beauty of fishing nets. But in this case, there are 100 miles of rope involved, and a half-million knots. The installation helps wake the city up after its long winter. The sight astounds and interrupts and lures us to the spot, and that is what we need as the last of the snow melts.

Echelman’s piece will have its opening ceremony on May 11th, and will remain in place until October. The majority of the funding for this piece comes from the Richard and Susan Smith Family Foundation, the Lynch Foundation, Autodesk, ArtPlace America, and anonymous donors. Also, public arts grants were awarded from the Boston Cultural Council ($3,000), Massachusetts Cultural Council ($2,500), and the National Endowment for the Arts.

The Greenway Conservancy has five more years of temporary art installations planned for the Greenway, which is almost a median strip with traffic on both side—but what a median strip, with a diversity of food trucks and art exhibits and even a merry-go-round. And now it has its own version of the Northern Lights that invites people to take a little lay-down in the grass and stare up at it and the sky. Next week, the Conservancy is apparently bringing in hammocks.—Ruth McCambridge