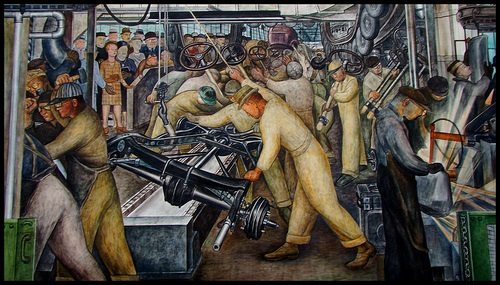 The much-heralded effort by a consortium of foundations to transfer Detroit’s Institute of Art and its prized collection to a new nonprofit, shielding it from bankruptcy proceedings, has run into competition.

The New York Times’ DealBook blog reports that four rival offers for the city’s art collection have come from parties on three continents, and could bring in more money than the deal that Detroit has already reached with the help of Michigan’s Governor Rick Snyder.

DealBook reports that the bond insurer provided the names of interested parties and terms of the art deals they hoped to explore to the United States Bankruptcy Court. “The proposals reached as high as $2 billion from a specialized New York firm that would lend that amount to the city, using the art as collateral.” The foundations’ rescue plan, by contrast, would provide about $820 million from themselves, Institute benefactors, and the state, with the money used to help pay partial pensions to Detroit’s retired city workers.

A financial adviser to the Financial Guaranty Insurance Company, one of Detroit’s many creditors, told the Times, “‘Cities can’t hide assets’ in bankruptcy any more than bankrupt people or companies can.” Financial Guaranty is asking Detroit’s bankruptcy judge to order the city either to consider the four proposals or to explore other ways of using the art to obtain more money, but it did not ask the judge to allocate such money among the creditors in any particular way.

The plan to shield the Institute’s collection from being liquidated, which could have resulted in it being split up and moved out of town, was announced with great fanfare late last year. It was viewed as an innovative way to keep it intact, while helping the city meet some of its outstanding obligations. It was also the most dramatic example ever of private philanthropy coming to the rescue of an ailing local government.

The bankruptcy court has yet to make a ruling on this latest development.—Larry Kaplan

More about: Arts and CultureFinancial Management