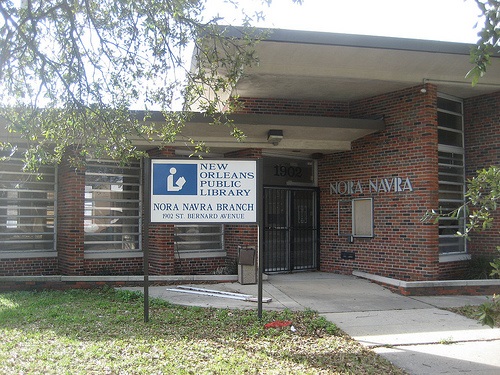 Shoring up the libraries of New Orleans with a proposed property tax increase will secure “one of the bright and hopeful” lights of civic infrastructure that is still, after nearly 10 years, working to recover from the ravages of Hurricane Katrina, according to New Orleans Times-Picayune contributing op-ed columnist Gordon “Nick” Mueller.

Most of the 13 branches of the city’s 110-year old library system were destroyed in 2005 by Katrina’s floodwaters. Thousands of volumes, collections, and holdings were lost, and post-storm assessments observed fish in library parking lots, overturned shelves, books floating in water, and doors that were, ultimately, “closed indefinitely.”

The system was resuscitated with help from private donors, government and volunteers, and heavy support from the American Library Association, which positioned the system as a key component of the rebuilding and revival that helped New Orleans to capture “Resilient Cities” funding by the New York-based Rockefeller Foundation in 2014.

A May 2nd municipal vote is set to raise property taxes by 2.5 mills (0.25%), which would add to the current 3.14 mills dedicated to libraries in a move to prevent budget reserves from depletion and operations from significantly decreasing or ceasing by mid-2016. The tax increase is expected to generate about $8 million a year for the next 25 years to enhance operations in the Crescent City library system.

In endorsing placement of the millage vote on the ballot, City Councilman Jason Williams equated a good library system with good crime prevention and told the Library Board chairman, “Closed doors on a library are closed minds.” Other public servants and their extended families championed the libraries as fundamental asset in the fight against illiteracy.

The rate of functional illiteracy in New Orleans stands at 44 percent according to the New Orleans Public Library Foundation, which maintains that:

NOPLF in 2013 spearheaded the launch of a Turn the Page Literacy Campaign, an ambitious initiative to make New Orleans the most literate city in America by its 300th birthday in 2018.

According to the Friends of New Orleans Public Library, passing the property tax raise on May 2nd will increase library hours and services, support investment in technology and reopen the 7th Ward branch. Seven of 14 library locations will close if the legislation does not pass, which Mueller suggests would effectively be “dismantling what was built back after Katrina and the levee breaches.”

Although the constitution of the public library has changed in the face of technology and digitalization, its humane capacity as a safe central place where children embrace new knowledge, individuals develop intellectually, and communities collaborate definitively has not. Their twenty-first century endangerment due to national economic recession and subsequent cuts to local and federal funding has fueled a pursuit of nontraditional funding, such as selling opportunities to advertise in library windows in San Diego, and on due-date slips in Toronto, Ontario.

While the upcoming millage vote to sustain New Orleans libraries may be a more traditional approach, the “greatest good vision” is the same. Libraries, said Mueller, “are important to our quality of life, to our city’s future—to our democracy. Sustaining them reflects, in a tangible way, the American spirit.”—Jessica Thorpe