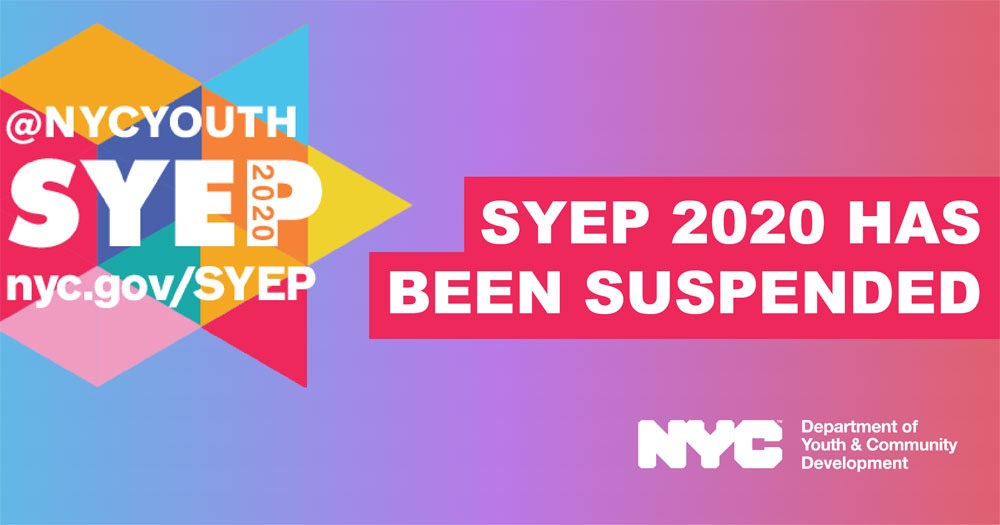 Yesterday, NPQ reported that unemployment for US youth ages 16 through 19 stood at 29.9 percent in May’s national report. As with all official government unemployment statistics, this is probably an underestimate, since discouraged workers aren’t counted. Some suggest a truer unemployment number for teenagers is in the 35 to 40 percent range.

Alas, in New York City, the city government, facing possible budget shortfalls of its own, does not seem to be helping matters. Back on April 7th, Mayor Bill de Blasio announced that the city’s annual Summer Youth Employment Program (SYEP) would be suspended, reducing its budget from $124 million to zero. De Blasio justified the program suspension on both fiscal and public health grounds.

Even as early as April 30th, however, De Blasio’s action had generated considerable community ire. As Taylor Swaak wrote for The 74, after a student called in to a radio program and put a question to the mayor, de Blasio offered “little clarity on what’s next for the roughly 75,000 14-to-24-year-olds who rely on the summer jobs program in normal times and may need it now more than ever with the pandemic hurting family income and social distancing leaving young people with nothing to do.”

Now with a partial reopening, pressure is mounting for de Blasio to change his tune. An overview report from the city’s Independent Budget Office finds “Mayor Bill de Blasio’s decision to cancel the Summer Youth Employment Program in the wake of COVID-19 will cause 70,000 young people to miss out on between $700 and $1,600 in wages each—potentially stripping families of a needed income boost as unemployment rates skyrocket due to coronavirus-related shutdowns,” writes Brooklyn Paper reporter Rose Adams.

The two-page report itself, prepared by Amanda Gallear, finds that in 2019 a total of 74,453 low-income youth (selected from among over 150,000 applicants) earned $109.2 million in wages through the program. A total of 10,548 participants, or 14 percent of all participants, were public housing residents.

Youth ages 16 to 24 who participated in the program last year earned $15 an hour—the state minimum wage—with work assignments lasting up to six weeks and up to 25 hours per week. Total earnings for these workers was $98.2 million, which works out to about $1,670 per person. Students 14–15 years of age received a stipend of $700 for a classroom-based program that focuses on work-readiness skills, with their stipends totaling $10.9 million. The mean wage contributes a modest but not insignificant five-to-six percent to average household income.

As Gallear’s report points out, the SYEP largely serves low-income New Yorkers. Indeed, she writes that 85 percent of participants “came from families reporting incomes of $31,000 a year or less.”

A teen-led nonprofit group known as Teens Take Charge has been actively campaigning for the program’s restoration. To support the campaign, it is using the social media hashtag #SaveSYEP.

One Bronx student, who has participated in the program for three years while his family has resided in a homeless shelter, tells Adams that program earnings allow him to buy new clothes every year.

“It was very helpful to me specifically because I was in a shelter and my parents didn’t have that much money,” says Rahkim Powers, a 17-year-old high school senior. “They had to work and save up so we can leave the shelter.”

Powers said he’s concerned that he won’t find a job this summer amid the coronavirus closure and soaring unemployment. “I’m very worried. I was dependent on that to pay for my clothes for school and to save up money.”

For his part, last week, de Blasio has said he is working with the City Council to “revitalize” the program. The city budget will be finalized by the end of June.

“The City Council has raised important ideas, proposals, ways of addressing how we revitalize the Summer Youth Employment Program in the context of this pandemic,” de Blasio said at a June 11 press conference. “That is an ongoing conversation with the City Council.”—Steve Dubb