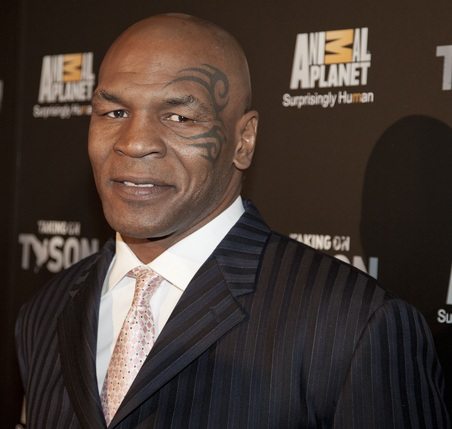 One would have thought that after his star turns in The Hangover and The Hangover II, Mike Tyson was on the road to full rehabilitation as an acceptable member of the celebrity set. With celebrity status comes celebrity charity, but for Mike Tyson, a charity foray into New Zealand has sort of backfired.

There are many things about Tyson one might want to forget but cannot—his rape conviction, his biting off part of Evander Holyfield’s ear, his threat to eat Lennox Lewis’s children—and his facial tattoo is also hard to ignore. Some years ago, Tyson appeared with a new facial tattoo that he said was inspired by the Maori, the indigenous people of New Zealand.

Admitting that he didn’t know much about the Maori, Tyson planned to visit New Zealand as part of his Downunder speaking tour. Technically, his rape conviction would bar him from visiting both Australia and New Zealand, but the New Zealand government had agreed to let him in because some portion of the proceeds from his visit would benefit a charity called the Life Education Trust. However, earlier this week, the country’s associate immigration minister announced that Life Education had withdrawn its involvement in the Tyson tour, leading the government to withdraw its approval for Tyson’s visit.

The odd part of the story is that the charity had decided long ago to refuse any support from Tyson due to reported “concerns over Tyson’s character.” However, somehow the group’s chief executive managed to send a letter to the immigration department endorsing Tyson’s trip instead. Apparently, however, despite New Zealand’s rejection of Tyson and his “Day of Champions” motivational speaking tour, Australia has given Tyson approval to visit, with the warning not to harm anyone during his visit.

This bizarre story points to a challenge for charities. In this instance, Tyson apparently wanted the charity as a means of getting his show into New Zealand. But the charity apparently didn’t want Tyson as much as Tyson or his reps wanted the charity. Do charities always know what celebs want from them or whether celebrities (or their handlers) are even promoting them without their knowledge? How is the public to know?

In any case, last weekend, Tyson announced the launch of the Mike Tyson Cares Foundation on Twitter. Its stated mission is “to ‘give kids a fighting chance’ by providing innovative centers that provide for the all-around comprehensive needs of kids from broken homes. These needs may include healthcare assistance, shelter, school assistance, mentoring, job placement assistance and such other needs as determined by the center for the overall well-being of the child. The Mike Tyson Cares Foundation also promotes offering financial support and / or services to other charitable organizations that emulate in hopes of furthering the all-around mission of the Mike Tyson Cares Foundation.” The foundation’s official launch will be in December at the Tabu Lounge of the MGM Grand in Las Vegas.

A kid who grew up very poor in the Brownsville and Bedford-Stuyvesant neighborhoods, Tyson was a high school dropout as a junior and was taken from juvenile detention when he was 14 by boxing trainer Cus D’Amato. We don’t doubt that Tyson probably would really like to do some good and give back to society. But we suspect that his charitable and philanthropic ventures show the hand of advisers, promoters (though he is retired as a boxer), and publicists. Are you going to the MGM Grand on December 9th to see Tyson’s fundraiser? Please be a citizen journalist for us!—Rick Cohen