Correction: The original version of this article incorrectly stated that the size of the Zuckerberg-Chan pledge was larger than total private giving in the U.S. in 2014. It is not. The pledge is $45 billion against $358 billion in all U.S. giving. This change is now reflected in the article.

In a letter on Facebook, Mark Zuckerberg and his wife, Priscilla Chan, announced both the birth of their first child and their intention to give away Facebook shares currently reported to be worth $45 billion. That sum, by the way, must be seen in the context of the $358 billion collectively given away last year in the United States—and that total was an all-time high. He will, of course, not disburse it all at once, but still…

This re-surfaces our concern voiced earlier this year about the effects of a growing wealth gap on our democracy, especially at a moment when so many public systems are integrating philanthropic dollars that have the potential to diminish the voices of others. Such philanthropic approaches smack of colonialism and carry with them an anti-democratic assumption that can only perpetuate and worsen inequality. Zuckerberg, of course, has had the experience of trying to buy an outcome in such a system with Newark, New Jersey’s schools.

And, indeed, even in what we can see of public vs. private social expenditures, we can see from this chart from the Organization for Economic Co-operation and Development (OECD) that the United States has a bigger issue in this regard than most countries this report examined. 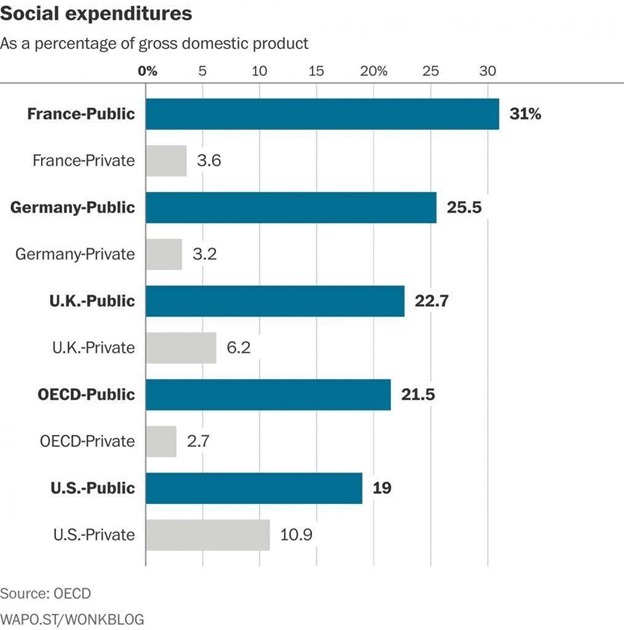 Yet the focus of the Chan-Zuckerberg family’s giving is declared to be “advancing human potential” and “promoting equality.” In the letter, the couple spends quite a bit of time laying out the importance of the approach in making any of this happen.

These points do not necessarily represent a coherent set of values strong enough to counter the enormous financial footprint of this pledge. We are frankly most interested in the third point, and we wonder about the potential conflict between that and the sixth point. As we all know, sometimes so-called independent experts and the people do not agree about what is in their best interests. We’d like to see redraft of this with an acknowledgement of the inherent and enormous danger in this massive gift and a prioritizing of the second over the fifth in any area of grantmaking that occurs in relationship to democratic systems or systems where top-down (or even expert-driven) decision-making is a abrogation of the decision-making of those who will have to live with the consequences.

Putting this together with his announcement two weeks ago that his new philosophy about giving was to “move slow and build things,” it appears that the Chan-Zuckerberg family is considering the question of who will drive the bus on transformational community change. That, after all, is a question quite central to any version of equality most of us would want to be a part of, and when you have $45 billion to throw around, non-colonial use of that would take a heaping helping of systematically adopted humility.—Ruth McCambridge