With No Budget, Illinois Colleges Are Hurting Badly

Nonprofit Quarterly has regularly reported on how the budget standoff in Illinois has damaged the state’s nonprofit sector. The political impasse, now approaching its second anniversary, has forced programs to be eliminated, organizations to close, financial reserves to be drained, and lines of credit (where available) to be tapped. With the mandated deadline for enacting next year’s state budget just weeks away, the state is facing the crumbling of its human services and educational infrastructure.

Reboot Illinois focused on the impact to the state’s public universities, colleges, and community college students in an in-depth look recently published by the Illinois Campaign for Political Reform. In the last year that had an actual state budget, higher education received a state allocation of $4 billion, about six percent of the total Illinois state budget. For all of 2016, the limited special allocations and stopgap budget agreements that were passed to ease some of the pain gave higher education only $2.6 billion.

The strain of coping with a 35 percent reduction in state funding was particularly difficult for smaller schools that had limited reserves to draw upon. For them, working with less money meant spending less, curtailing their educational efforts. The ICPR recounts the choices forced on state colleges in an infographic:

Based on ICPR’s analysis of enrollment numbers, the changes being forced on state schools and the continued uncertainty of what further reductions will become necessary have resulted in prospective students looking elsewhere for their college educations. Compared to other large states, higher education enrollment in Illinois has fared badly, particularly at small and mid-size institutions, those for which the budget impasse has been most difficult to offset. 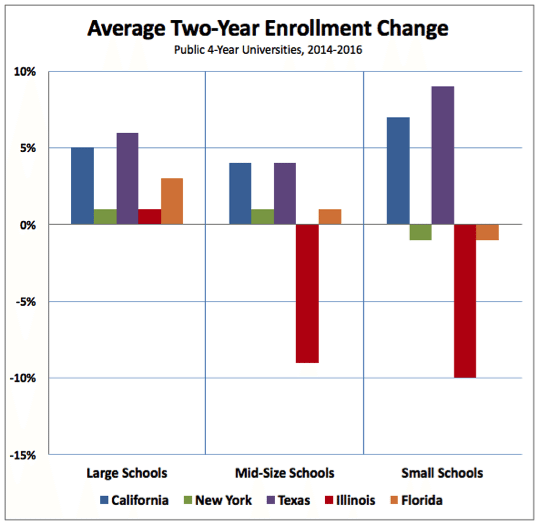 Lower enrollments further decrease a school’s financial strength, setting up a downward spiral that can be difficult to escape even after the state’s budget problems are resolved. State senator and high school teacher Tom Rooney recently described this for the Chicago Sun-Times:

When numbers start to drop, that feeds itself. These reputational things tend to grow. The word spreads to faculty, making it harder to attract good professors. Then college town landlords have trouble renting and the corner pizza joint shuts down. Before we know it, entire communities created by the local college are withering.

Colleges and universities are struggling, but they are only one sign of the significant harm being done throughout the state’s nonprofit sector. And the end does not seem in sight.

Much of the effort has now turned to creating a budget for 2018, leaving behind the unmet needs of the current year. The governor recently submitted his budget for 2018, but it was seen as a continuation of the same approach that has failed to bring Democrats in the state legislature and the Republican governor close enough to reach an agreement that can be signed into law and enacted.

Laurence Msall, president of the Civic Federation, aptly described the current situation in a statement he released with the federation’s annual report.

Operating Illinois on autopilot is not a solution, nor is it sustainable. Rather, it represents an abdication of the most basic constitutional responsibilities of proposing and passing a balanced budget…. The Governor and General Assembly need to end this unacceptable stalemate by passing and enacting a comprehensive plan. Cherry-picking certain areas of government to fund while pledging to work toward a complete budget sometime in the abstract future has not and will not end the crisis and in fact is making it worse.