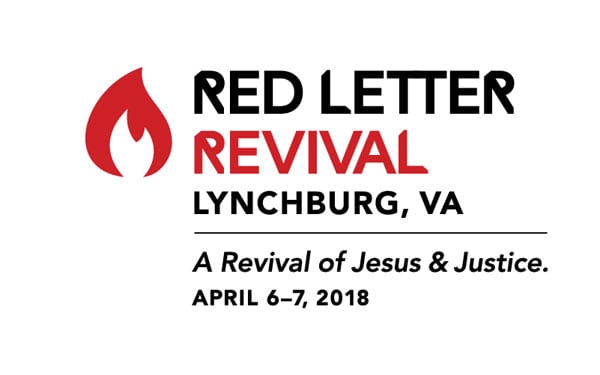 “This is not of God,” thundered Barbara Williams-Skinner, an influential black evangelical elder in Washington as the audience stood and clapped at the revival. “This is not worthy of our savior. This is not what he died for.”

As the antics and proclamations of Donald Trump and his administration move far afield from the closely held value proposition of Evangelical Christians, one might look for a rebuke or a separation from the staunch support that this religious community has given him. But so far, not so much. One only has to look to the efforts of Shane Claiborne, a leader of the Red Letter Christians, a liberal evangelical group that wished to hold a revival and protest at Liberty University in Lynchburg, Virginia.

The phrase “Red Letter Christians,” explains Laurie Goodstein in the New York Times, refers “to the words of Jesus printed in some Bibles in red type.” Goodstein adds that, “They don’t align neatly with either political party. But they have fierce moral and theological objections to those evangelicals who have latched onto Mr. Trump and the Republican Party.” As Claiborne, a Tennessee-based evangelical, puts it, ““There is another Gospel in our country right now, and it is the Gospel of Trump. It doesn’t look much like the Gospel of Jesus.”

Liberty University is led by the Reverend Jerry Falwell, Jr., often viewed as the leader of the Evangelical movement in the United States. Falwell’s a close friend and supporter of Donald Trump. Claiborne, on the other hand, lives his evangelical mission daily—sewing his own clothes, living among the poor, working with those in prison, preaching, and modeling his life on that of Jesus.

“Let’s go where the Christians are, go where toxic Christianity lives,” Mr. Claiborne said last year, when proposing the idea for a revival in Lynchburg at an annual retreat for the Red Letter Christians.

The revival last month was the most energetic of several recent attempts by Christians in various camps to confront what they see as Mr. Trump’s “court evangelicals” selling out the faith. The critics have written columns, and a book called Still Evangelical? They convened a closed-door summit last month at Wheaton College. A number of bereaved, eminent elders went to the White House last week and handed over their manifesto, “Reclaiming Jesus: A Confession of Faith in a Time of Crisis.”

Mounting this revival was a daunting task, and the Red Letter Christians were small fish in a big pond, especially in Lynchburg, where Liberty University is the largest employer. Despite threats to jail him if he came onto campus, Claiborne pursued his cause and worked hard in advance of the revival. He and Red Letter Christians’ executive director, Don Golden, did the legwork and reached out to local ministers to help recruit crowds and engage new believers. Still, they ran into roadblock after roadblock. The president of Lynchburg College told his faculty and chaplains that they could not host meetings or hold events with Red Letter Christians. Golden was told again and again that leaders and ministers in area churches all had jobs at Liberty University and that, while they believed and aligned with the Red Letter Christians, they could not risk their livelihood by showing up at their event.

“We didn’t want to take sides. We have a fine relationship with Liberty,” said Michael Jones, a spokesman for Lynchburg College, which is also a Christian school.

Victories for Claiborne and Golden were few. The event took place in an auditorium off campus, with poor attendance.

When the day of the revival came, the mood and the music inside the cavernous auditorium was upbeat, but began to deflate as the 2,000 seats failed to fill. About 350 people from 28 states attended over two nights. Many said they felt alone in their home churches and had come to find their tribe. Another 3,500 watched a livestream. Roughly two dozen students from Liberty University came.

Mr. Claiborne still wanted to lead a group onto the Liberty campus and hold a prayer vigil—or at least leave a gift for Mr. Falwell, who had just opened a new $3.2 million gun range on campus. Mr. Claiborne had ready a hand plow that he made from a melted-down handgun, a literal following of the Bible’s instruction to “beat swords into plowshares.”

Instead, a small box of prayers for Liberty University was walked into the chapel on campus by a single, elderly founder of the Red Letter Christian movement.

A small victory? Perhaps. But the issue at play here—a dispute among those who hold power and money and those who dispute them but have little funding and are not a united front—is not new. What is sad is how many remain silent and in fear of losing their jobs or splitting their congregations if they speak up. Perhaps the Reverend Byron Elliot, a Baptist Minister in Lynchburg who chose to speak at the revival, standing on the shoulders of his father, who was also a reverend and a civil rights leader, summed it up best: “Everyone’s afraid,” he said, pausing. “That’s strong language. Everyone’s very mindful of how they speak and how they deliver the truth. It’s hard to tell the truth in a context like Lynchburg.”—Carole Levine