Noncommercial Media on the Rise; Where’s Its Combined Strength? 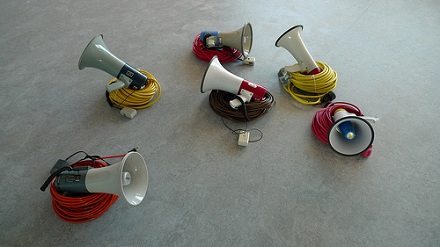 In a post on MediaShift, Josh Sterns and Candace Clement suggest that it is time for various kinds of noncommercial media to come together around a common purpose. They point to “Greater Than the Sum: Creating Collaborative and Connected Public Media in America,” an report issued in August by Free Press, featuring an argument that it is time to begin to build a stronger image and profile for nonprofit journalism and media in America—one that recognizes the central importance of media in the lives of people and the future of the nation.

Sterns and Clement pay homage to the diversity of types in the current network of non-commercial and nonprofit institutions that have sprung up to serve local communities “by providing alternatives and filling the notable gaps left by commercial media.” They are, as the authors write, “re-envisioning public service media” but often in isolation from one another.

Meanwhile, there are multiple barriers to their success emerging at every turn. They cite legal and political challenges and the challenge of the IRS’s reticence to approve nonprofit status for new journalism sites (now perhaps eased a bit) but there are also the overwhelming challenges posed by a business and publishing paradigm in serious experimentation mode. Noncommercial publishing is interdependent but maybe is not acting as if it is. “If Congress succeeds in de-funding NPR and PBS,” argue the authors, “it will send shockwaves through the entire non-profit journalism community.”

Sterns and Clement point to framework, developed by Ellen Goodman and Anne Chen, which depicts “a layered model of public media that maps onto the realities and capabilities of digital networks,” thus creating a better overall ecosystem for the work.

Sterns and Clement ask, “Do you agree that it’s imperative to create a more unified non-profit media sector? What opportunities do you see for creating more unity? What obstacles might prevent organizations from collaborating more closely?” –Ruth McCambridge