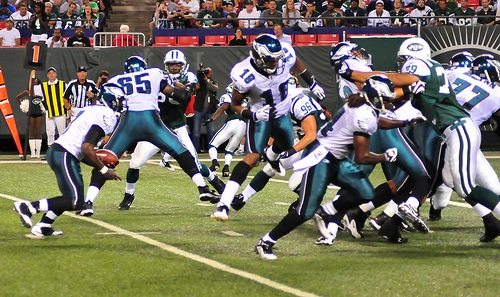 The NFL is by no means your average nonprofit, and its tax-exempt status has been the topic of more than one article at NPQ over the past few years, but if it’s going to claim tax exemption, NPQ will call it to account. This leads us to comment on the recent settlement made by the NFL with former players concerning neurological injuries suffered during their playing careers. Was the settlement sufficient redress? Or were other agendas being served?

Notwithstanding the announcement of a $765 million settlement with former players, the big news around Labor Day about the National Football League—a 501(c)(6) trade association—concerned Geno Smith replacing Mark Sanchez as the N.Y. Jets’ starting quarterback, Robert Griffin III being cleared by his doctors to start at QB for the Washington, D.C. franchise, and the Patriots cutting the iconic Tim Tebow. Sanchez, Griffin, and Tebow are (or, in Tebow’s case, were) employees of professional football teams; they are the workers who make the NFL function on the gridiron.

Even though NFL player salaries don’t typically compare to those of many pro baseball and basketball stars, and though football players’ careers are typically shorter than those of other sports due to the physical contact involved in the sport, they aren’t generally doing badly. Per the collective bargaining agreement with the players union, the base salary of a NFL player is $375,000; in 2011, the median salary of a pro football player in the NFL was $770,000 and the average salary $1.9 million, skewed by the nearly $20 million or more pulled in by the likes of Peyton Manning and Tom Brady.

In earlier years, particularly for players who weren’t the highly protected marquee quarterbacks, salaries were mostly much lower and, without today’s understanding of the impact of concussions and other injuries on long-term player health, NFL players often had challenging careers that ended with little in the bank—plus lots of long-term health issues. The cause célèbre of players’ injuries affecting their post-career lives are the neurological effects of concussions. According to the NFL Concussions twitter feed, there are at least 51 players currently listed with concussions before the regular season starts next week, including Bears wide receiver Earl Bennett, Panthers safety Haruki Nakamura, Bills quarterback Kevin Kolb, Washington linebacker London Fletcher, and Justin Pugh of the Giants, just to name a few.

In 2011, the courts ruled that the NFL was not obligated to help retired players who were suffering with the effects of neurological injuries incurred during their playing careers. Essentially, the NFL owed the players nothing more than it agreed to pay them as their salaries. Former players kept on litigating, however, with some 4,500 retired players taking the NFL to court, including Hall of Fame member Tony Dorsett, former Bears quarterback Jim McMahon (who has been very public with his health condition), and the family of Junior Seau, the Chargers linebacker who committed suicide last year. At the crux of the most recent class action case was the contention that the NFL had information about concussion-related brain problems for many years, didn’t share that information with the players or act to protect their health, and even gave short shrift to their concerns. For example, they recruited a rheumatologist to lead the NFL’s Mild Traumatic Brain Injury Committee — the name standing as a possible hint as to the NFL’s view of public discussion of concussions.

Just before Labor Day, the plaintiffs and the NFL reached a $765 million settlement. The deal calls for the NFL to compensate former players and their families from a $675 million pool (the other funds will go to baseline medical exams for all retired players, research, and education). The agreement calls for individual awards for players who have or eventually develop ALS (Lou Gehrig’s disease), Parkinson’s, or Alzheimer’s to be capped at $5 million, awards of $4 million for the families of players who were diagnosed with chronic traumatic encephalopathy (CTE) after they died, and $3 million for dementia. In addition, the NFL will be required to disburse half of the $765 million in the first three years after the settlement and the remaining funds over the following 17 years.

It looks like a big number over 20 years, but is it really? Former Jets center Kevin Mawae was incredulous, noting on his Twitter account that the NFL has plans to pull in $27 billion in revenues by 2025. In the 2011-2012 season, NFL revenues were $9.5 billion, nearly one-fourth higher than the total revenues of Major League Baseball. Disbursed over 20 years, the NFL payment will be perhaps one percent of League revenues. The brother of former Bears and Giants safety Dave Duerson denounced the settlement as “not enough.” (After leaving instructions that his brain be used for research, Duerson committed suicide in 2011. Doctors revealed that he had been suffering from CTE.)

That’s the money part, but another element of the settlement is equally important. The agreement does not require the NFL to admit any fault or culpability, and relieves the NFL of the burden of having to disclose any internal files or documents that, if the players were correct, would reveal that the League was aware of the problem of concussions and did nothing to minimize or prevent them. In the words of the NFL’s Roger Goodell in an interview with CBS, “there was no admission of guilt [by the NFL]. There was no recognition that anything was caused by football…” He claimed that the NFL signed the deal in order to “get relief to the players as soon as possible, and their families…The reality is we want to help our players.”

Other observers believe that the NFL got off cheap, using the payments to players and their families as “hush money” to stanch investigations that might have revealed that NFL suits knew what they were doing with concussions, CTE, ALS, and Alzheimer’s, knew that they were actually killing people slowly, not just those like Seau and Duerson who committed suicide, and knew that a long trial would lead to disclosures that would embarrass the League to no end.

“I’m used to the NFL taking a hardline approach, as they have throughout the years with strikes and everything else,” said former Pro Bowl lineman Lomas Brown, a plaintiff in the concussion-related lawsuits. “I’m curious how they came up with the figure and I’ve got a lot of questions, but I am happy that it’s done…Any time the NFL acknowledges they are ready to settle something, it shows they knew they had some sort of negligence.” In Mawae’s words, “it’s $700 million worth of hush money that they will never have to be accountable for.”

According to former NFL quarterback Neil Graff, “To me, that’s kind of an important point, that they admit that they were wrong and what they did was not in the best interest of the players. In this case, without going through the full length of litigation, they’re able to back off from that particular issue and not admit any fault. I personally would like to see them fess up a little bit to that particular issue.”

For the tax-exempt NFL, whose highest-paid employee is not Manning or Brady, but commissioner Roger Goodell, who now makes about $30 million a year, the settlement is chump change. It gets to hide the evidence that would have revealed the League’s culpability in what has happened to some of these players. But in this case, the courts are protecting the confidentiality of the League’s documents like the League were the CIA or the NSA. As much as any institution in our society, the NFL needs its version of Chelsea Manning or Edward Snowden to reveal who knew what when. No lives of U.S. foreign policy officers or soldiers will be endangered by an NFL whistleblower equipped with a couple of Manning/Snowden thumb drives, but the possibility of next-to-criminal behavior on the part of some NFL execs might get much deserved public discussion.

Do you think that paying off the players with some NFL pocket change didn’t have suppression of evidence as part of the strategy? Earlier in August, ESPN, the cable sports network that makes oodles from its television deals with the NFL, withdrew at the last moment from a collaboration with the PBS Frontline on the concussion problem in the NFL. Previously, the NFL refused to cooperate with the ESPN/PBS pairing “in any way.” The filmmaker for the documentary, Michael Kirk, compared the NFL’s resistance to sharing information with the attitudes he had encountered in the past to the CIA. The NFL denied that it had put any pressure on its “business partner” ESPN, living up to the name of the Frontline show (and an upcoming book by investigative reporters Steve Fainaru and Mark Fainaru-Wada), “League of Denial.”

No pressure on ESPN to pull out, no culpability for the brain-related injuries suffered by former NFL players, and no revelation of what the execs really knew all those years about what was happening to 18,000 former players—that’s the outcome of the suit. But we are guessing that rather than laughing their way to the bank, the NFL top brass are taking deep sighs of relief that they won’t have to open up their files to the attorneys of the former players and reveal what this tax-exempt entity really knew about the injuries affecting turning former world-class athletes into persons unable to take care of themselves, open doors, climb stairs, or recognize family members. In some terribly sad cases, they suffer from neurological conditions that drive them to take their own lives. One of the wealthiest tax-exempt organizations in the U.S., turning over annual profits that many mega-corporations cannot imagine, gets to pay its way out of public accountability to the workers whose play on the field allowed the NFL to become the financial behemoth it has now become.