Nonprofit Assesses the Impact of Public Health Ads on Children 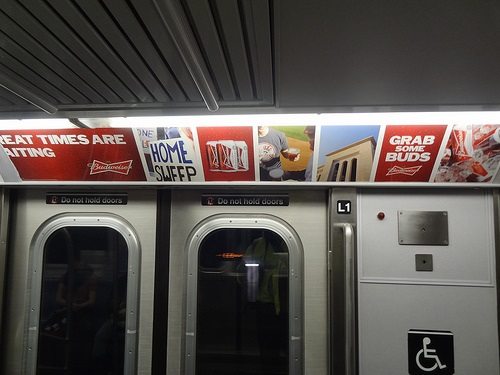 Following one Massachusetts town’s crusade to ban the sale of any tobacco or nicotine product, a nonprofit in Harlem, New York, is investigating the impact that alcohol and tobacco ads can have on a younger audience.

Substance Abuse Free Environment (SAFE) has launched the “Photovoice” project in conjunction with students at local college New York Institute of Technology as the first phase in part of a 10-year-long effort to ultimately reduce substance abuse in Harlem.

For this first phase of the project, ending in mid-December, six students from NYIT students will take pictures of alcohol and tobacco ads between Broadway and Fifth Avenue. At the conclusion of the phase, the students will compile their photographs and present SAFE coalition members with a final report.

The findings of the project will help the nonprofit better understand how and whether teenagers and younger children take in and engage with the information provided on these ads. Along with the results of the project, a survey will also be administered later this year to a high school in Harlem in order to create a substance abuse prevention curriculum which schools that are part of SAFE’s network can adopt.

“Based on this information we are going to be able to, first, get a sense of the accessibility of alcohol in the Harlem community and, second, look at how that information is portrayed to young people,” said Asari Offiong, a prevention specialist at the Children’s Aid Society and the director of the project. “What do the ads say? Who are they appealing to? Are they engaging?”

SAFE’s network includes 12 organizations and agencies, including Mount Sinai Hospital, Harlem Hospital, and Children’s Aid Society, among others. For the project, the nonprofit will be applying for a 10-year grant amount to $125,000 from the Drug Free Communities Support program of the Office of National Drug Control Policy. The grant would also need to be matched with SAFE fundraising on its own.

“Harlem Hospital and Mount Sinai and Phoenix House are the treatment side of it. First Corinthians serves as the spiritual side,” said Offiong. “We really wanted to have all of these various components come together through these entities in order to attain our goal.”

After compiling and interpreting the information from the project and survey, SAFE will then assess what steps may need to be taken to curb the effects of the images, such as asking store owners to rearrange their alcohol displays out of the view of younger customers or find new locations for the sale of tobacco products. (The placement of cigarettes behind the counter as a safety measure at variety stores like Walgreens may in fact be encouraging their purchase.)

SAFE’s campaign comes at a time when states and stores are taking measures to stop the sale of tobacco products. However, many question, as they do as Westminster, Mass., contemplates a tobacco ban, whether it will prevent or encourage any smoker to quit. When CVS Caremark took cigarettes off their shelves in September, they did so because they believed selling tobacco products contradicted their healthcare mission. It also sent a powerful message to their customers. Once CVS stopped selling tobacco products, they also began offering programs for patrons to quit smoking.

However, even with these measures, the struggle for tobacco ads remains rooted in their targeting of a younger audience. “The tobacco companies are really promoting products to hook young people,” said Westminster health agent Elizabeth Swedberg, referring to the phenomenon of electronic cigarettes and the transformation of tobacco into bubble-gum flavored cigars and tobacco candies. “The board [of health] was getting frustrated trying to keep up with this.”

Swedberg cited a recent study by the U.S. surgeon general that said if tobacco use was not curbed, 5.6 million American children younger than 18 would die a premature death due to smoking.

This September, Missouri became the 41st state to ban the sale of e-cigarettes to minors, and last year, New York City became the first large city to change the minimum age to buy cigarettes to 21, effectively banning the sale to all teenagers. SAFE’s initiative not only has cause, but a supportive national audience cognizant of the issue at hand.—Shafaq Hasan