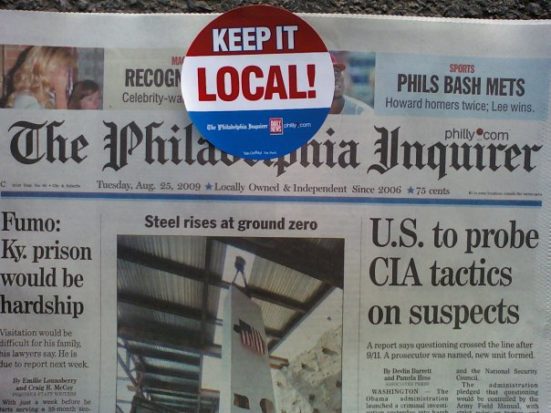 Early this year, NPQ reported on a strange-looking deal where H.F. “Gerry” Lenfest donated the Philadelphia Inquirer, the Philadelphia Daily News and Philly.com—along with $20 million—to a newly created tax-exempt organization, the Institute for Journalism in New Media. We commented at the time that we were not sure what the point was, because it did not seem to solve any problems; in fact, it appeared to heap enormous complexity on the operations of these news operations.

But now we think we may have missed an obvious point. A report released by the Knight Foundation observes that the nonprofit form “is not a cure-all, but…does offer a couple of advantages, namely, it is less likely to be sold or dismantled by profit-seeking ownership and it reduces profit margin expectations. […] On a day-to-day basis, the arrangement changes little. It faces all the same business model challenges and economic realities it faced before. And it still needs to make more money than it spends.”

As some readers may recall, we discussed this basic and profound difference recently in an interview with Douglas Rushkoff, where he commented:

While the public looks at nonprofits as do-gooders, I’m looking at the structure of nonprofits and not-for-profit corporations as business entities. Because they’re not for sale, because they’re not shareholder- or share value–maximizing companies, what they end up doing is promoting revenue and the exchange of value and the circulation of money, which revives a whole economy rather than enriching the few.

In this case, we are looking at an entity that serves the public good in terms of enhancing an informed democracy. It makes good sense not to leave that role in the grip of extractive market forces, for which profit is king. But, again, even when the principles are right, the job of achieving sustainability where journalistic ethics reign supreme is more complicated—requiring patient capital.

To ease its way into this less demanding form, the institute wants to raise $100 million in endowment to fund the newsrooms, research, and development of digital tools and public-interest journalism. It started with the $20 million from Lenfest, and the report says it has grown, but did not reveal by how much.

The structure of the Philadelphia project still seems to us potentially unnecessarily complicated, but this re-homed industry will need a lot of experimentation for its final form to become visible.—Ruth McCambridge