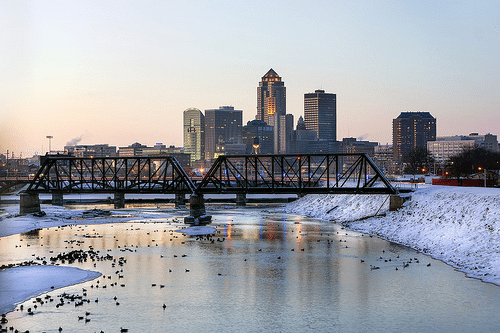 In Des Moines, the Bill Jensen auto dealership used to occupy 1.1 acres near downtown, in the 1800 block of Ingersoll Avenue. But in 2013, ownership transferred to the Lutheran Church of Hope. If it were a for-profit company, it would be bringing in $25,000 in local taxes.

“There’s got to be a balance there,” Des Moines City Council member Christine Hensley said. “We don’t have to drive them out of business, but on the other side, I don’t want them driving us out of business…I want to be supportive of the churches, but when you’ve got prime property and you’re making a lot of investment in Ingersoll, it’s disappointing to see that it will not be on the tax rolls.”

As this article portrays the situation, no one is saying that local nonprofit growth does not add value to the community, but it does take property off the tax rolls—and in terms of Des Moines, the amount of that exempt property has grown 38 percent over the past ten years. The growth has resulted from the expansion of churches and universities and from nonprofits that now own buildings where they used to pay property taxes through rent. In all, the property is valued at $1.3 billion exclusive of government-owned property. Between both nonprofit and government-owned property, it is estimated that 40 percent of all Des Moines property cannot be taxed.

Much of Des Moines’ tax-exempt property is owned by two major healthcare providers, four higher-education institutions, and large churches. (Education and healthcare are two sectors of the environment that are fastest growing and are often nontaxable.) Des Moines has cut $30 million and 310 jobs over the past eight to ten years, and police and fire protection, taken on its own, accounts for 62 percent of Des Moines’ city budget. Des Moines does collect about $4.2 million in PILOT payments for police and fire services from nontaxable organizations, but most is coming from local public agencies like the Des Moines Water Works, the Wastewater Reclamation Authority, and the Des Moines Airport Authority.

“Let’s be honest: Many nonprofits operate on a very bare-bones budget, too,” said Alan Kemp, president of the Iowa League of Cities. “City councils are sensitive to that.” Still, if nonprofits expand enough in a particular area, they must come to the table and it is best that that approach be made out of a willingness to build local health.

Richard Koontz, director of the Iowa Nonprofit Resource Center at the University of Iowa, said, “The best thing that can happen in any local jurisdiction is for nonprofits and local governments to sit down together, share insights about needs for the community and what group can best deliver those needs…if out of that dialogue comes a good solution in terms of voluntary (payments in lieu of taxes), then that’s great.”—Ruth McCambridge