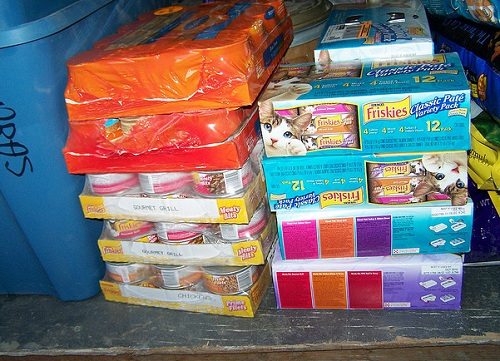 When the economy is bad for people, it’s often equally bad for their pets. In recent years, we’ve seen many news stories about pets being abandoned when people had to downsize or when they lost their homes to foreclosure. Animal shelters have also reported seeing a rise in sick animals whose owners can’t afford to care for them.

A new nonprofit in New York State has now opened a program offering pet food stamps to struggling pet owners. How great is the demand? In just one two-week period last month, 45,000 pet owners applied for pet food assistance, according to Pet Food Stamps founder Marc Okon. Okon says the program is “aimed at preventing people from having to choose [between] feeding themselves or their animals or having to surrender them to a high-kill shelter.”

The program delivers pet food and other pet supplies monthly to those who qualify. There is no cost for the food deliveries to pet owners. Owners must either be receiving food stamps themselves or fall below the federal poverty line. Pet food is one of the items that cannot be purchased with food stamps, and it’s estimated that 15 percent of all Americans are on food stamps.

So far, the nonprofit is clearly showing that it has filled a void. Pet Food Stamps reportedly gets about 3,000 requests every day from people across the country. The program is open to any qualifying United States citizen, and the assistance can last for up to six months. –Mary Jo Draper