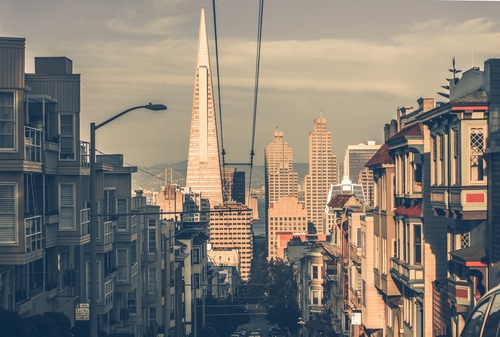 Local solutions to affordable housing needs in incredibly expensive housing markets like San Francisco’s are difficult to say the least, but at least one proposed development in San Francisco offers some hints for action. A partnership between the for-profit Strada Investment Group and the nonprofit Community Housing Partnership will create a mix of supportive housing for formerly homeless individuals and families where market-rate housing will also be built. The proposed redevelopment of the Civic Center Hotel, owned by the Local 38 Plumbers and Pipefitters Union, will yield 477 market rate units and 107 (another source says 110) below-market supportive housing units, though the Civic Center Hotel had already provided 71 affordable units (56 currently occupied), though without the supportive services that the Community Housing Partnership will provide in the new complex.

The lessons? First, that the impetus for affordable housing can come from the market-rate development interests of private for-profit developers. If developers like Strada want to take advantage of the market rate development opportunities of a community like San Francisco where the market is booming, they can be induced—or required, as it appears in this case, perhaps because of the existing affordable units at risk—to generate affordable housing units contingent on their ability to build for market rate units in a hot market.

The second lesson is that there is that bringing nonprofits into the equation as co-developers and partners is critically important. The track record of a nonprofit like the Community Housing Partnership gives the community an inside player to hold the for-profit developer—and the city government—to their promises to the community.

There are a couple of aspects of the development that may be unclear to outside observers looking to the press coverage for answers. For one, it appears that the development will also include building a new headquarters and union hall for Local 38, which was one of the requirements of the union for it to agree to a new development of the hotel site. It is unknown from the press coverage we have seen as to how much of the development costs of the project will be eaten by the new union facility. The union isn’t selling the property to Strada, but providing it on a 99-year ground lease. Might there have been a way for the deal to have been structured to produce more affordable units with less of a facility benefit to the union?

A second question concerns the affordable housing units themselves. One article cites Jason Henderson, the chair of the transportation and planning committee for the Hayes Valley Neighborhood Association, not only arguing that the union-owned project could have and should have yielded more affordable housing, but expressing concern that the planning documents allow the developer to build the affordable units on-site or off-site or to pay a fee for the off-site alternative. Henderson talks about 12 percent, which is the proportion of the development that the 71 existing units would be. However, another article indicates that Strada is going to build 110 units on-site, though in a separate structure at the rear of the property. The idea of mixing affordability in one complex is important for economic diversity in place like downtown San Francisco where the market is driving low- and moderate-income households out at a rapid clip.

A third concern is timing. Strada partner Michael Cohen, the economic development director for former mayor Gavin Newsom, says that it will take as long as two years or even a bit more for the project to get all the approvals and permits it needs to begin construction. Anyone familiar with affordable housing knows that it is the prolonged timeframe of getting approvals, exacerbated by delays and changes, that raises the construction costs of affordable housing and reduces affordability. If cities like San Francisco that are dedicated to producing affordable housing are going to take that long to get projects to the starting line, what does it say for affordable housing developers facing off against recalcitrant city governments?

The reality is that the Civic Center Hotel is long past its useful life, according to Strada’s Cohen. An article on the hotel from earlier this year, prior to the Strada/CHP announcement, described it as a “magnet” for trouble, a “rat-infested slum known for violence and harboring drug dealers,” but located only blocks from the headquarters of Uber and Twitter. The market for redeveloping the site is there. It will be the presence of the nonprofit Community Housing Partnership, slated to take over the management of the hotel as soon as July 1st, that will play a crucial role in ensuring that affordable housing numbers get retained as this project goes forward.—Rick Cohen