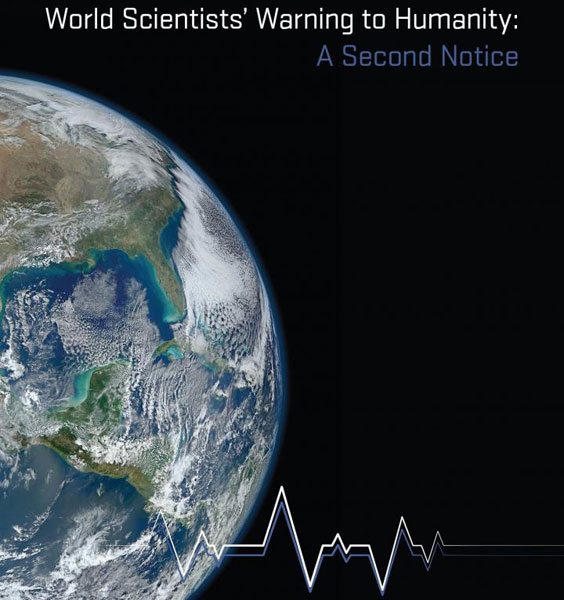 A quarter of a century ago, the Union of Concerned Scientists issued its “World Scientists’ Warning to Humanity.” In this article, then supported by 1700 scientists including many Nobel laureates, the authors indicate that “a great change in our stewardship of Earth and the life on it is required, if vast human misery is to be avoided.” Twenty-five years later, scientists issued a second warning, and indicate that far from heeding the advice of the first warning to humanity, we have failed in almost every regard. The authors note:

Since 1992, with the exception of stabilizing the stratospheric ozone layer, humanity has failed to make sufficient progress in generally solving these foreseen environmental challenges, and alarmingly, most of them are getting far worse. Especially troubling is the current trajectory of potentially catastrophic climate change due to rising greenhouse gases (GHGs) from burning fossil fuels, deforestation, and agricultural production—particularly from farming ruminants for meat consumption. Moreover, we have unleashed a mass extinction event, the sixth in roughly 540 million years, wherein many current life forms could be annihilated or at least committed to extinction by the end of this century.

This ominous message has now been signed by over 20,000 scientists, urging humanity to take action and reverse our current trajectory. While leaders across the world have taken this warning seriously, the United States government seems to be largely ignoring this message. The current administration is acting in complete opposition to the solutions put forth by the researchers.

For instance, one of the possible solutions is to reduce the carbon footprint by smaller family sizes, particularly through family planning education and access to contraception. The Trump administration has significantly cut funding to programs like the Teen Pregnancy Prevention program that have had marked success in reducing teen pregnancy. The researchers call upon society to limit consumption of fossil fuels to curtail climate change, yet the EPA has banned the phrase “climate change” from its grants and the US has pulled out of the Paris Agreement. In the NPQ article, “Climate Change will Affect the Work of Nonprofits,” Erin Rubin discusses how climate change is having a direct impact on our health, which will only get worse as we continue down our current path. She aptly argues that “As President Trump attempts to curb federal environmental regulations and Americans’ federal guarantees of access to healthcare, it may be worth considering that the future public health environment will look different from what we see today.”

NPQ’s vast coverage of climate change shows that the nonprofit field and its work is directly influenced by, and can have an impact on, climate change. This is not a problem that can be segmented to nonprofits focusing on environmental issues. Rather, health organizations, advocacy groups, social services organizations, and more must heed this warning to humanity.

Fortunately, although the government has not regarded the warning to humanity, many nonprofits and advocacy groups have. In Karen Kahn’s “An Inconvenient Reality: The Ice is Melting, Seas are Rising,” she paints a more positive picture. While President Trump has pulled from the Paris Agreement and denied climate change, other countries that were previously opposed have now committed, such as India and China. Moreover, she mentions that states have come together to form the US Climate Alliance to “keep the US on track to meet its Paris commitments.” The rise of green bonds shows that countries and states are committed to mitigating climate change through facilitating carbon-reduction and a switch to clean energy. At the community level, nonprofits have formed urban parks, reduced food waste, cloned trees—you name it.

These actions are in line with the authors’ recommended solutions. Moreover, the authors of the second warning to humanity point to the nonprofit field, through advocacy and grassroots organizing, as an important player. They say, “As most political leaders respond to pressure, scientists, media influencers, and lay citizens must insist that their governments take immediate action as a moral imperative to current and future generals of human and other life. With a groundswell of organized grassroots efforts, dogged opposition can be overcome and political leaders compelled to do the right thing.”—Sheela Nimishakavi