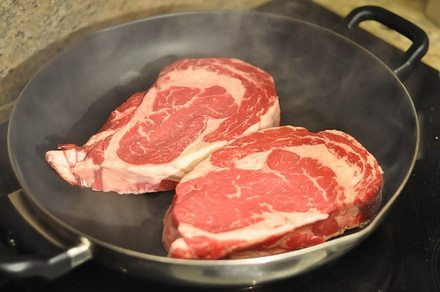 For a brief period of time, the U.S. Department of Agriculture (USDA) appeared to be endorsing the work of the nonprofit Monday Campaign, which strives to “help end chronic preventable disease by offering a weekly prompt that can support people in starting and sustaining healthy behaviors.” That weekly health prompt includes campaigns encouraging smoking cessation on “Quit & Stay Quit Monday” and promoting that young men get tested for HIV and STDs on “Man Up Monday.” The nonprofit also promotes “Meatless Mondays,” which, as the name suggests, recommends that people skip eating meat for at least one day of the week.

The July edition of the USDA’s internal “Greening Headquarters” newsletter had included a pitch for USDA employees to participate in “Meatless Mondays” at the agency’s cafeteria. The newsletter has since been taken down, though you can still find it here. Why the retraction of support for the nonprofit campaign? It seems the National Cattlemen’s Beef Association (NCBA) didn’t take too kindly to the suggestion that Americans should abstain from eating their main product at least once a week. The beef industry trade association posted a statement on its website declaring, “This move by USDA should be condemned by anyone who believes agriculture is fundamental to sustaining life on this planet.”

“When it comes to health, beef has an amazing story to tell,” said NCBA President J.D. Alexander in a statement. “Beef is a naturally nutrient-rich food, helping you get more nutrition from the calories you take in.”

This is not the story that the Harvard School of Public Health has to tell about beef. According to Harvard’s Healthy Eating Pyramid—developed as an alternative to the former USDA Food Pyramid—beef should be included in one’s diet only “sparingly” (poultry is considered healthy as a more frequent option for eating meat). The USDA has since replaced its pyramid with its new MyPlate program. In moving from a pyramid to a plate, the new USDA simple graphic on healthy eating largely avoids the beef issue altogether by lumping beef in with an overarching “protein” group. Harvard contends that it presents a more ideal healthy diet than the USDA and argues that the USDA’s pyramid was “based on out-of-date science and influenced by people with business interests in the messages the icons sent.”