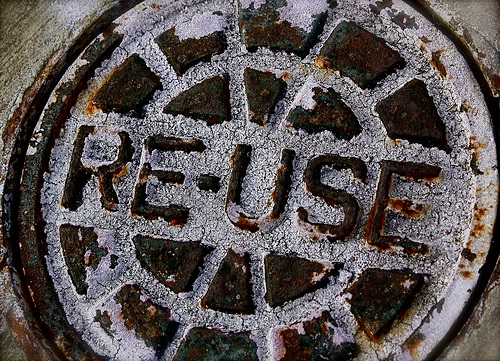 Sometimes, “win-win” sounds like just a bad cliché. Other times, it’s exactly right for describing a partnership or a fresh approach to solving a problem. In the case of Maia Moms, a newish nonprofit in Charleston, S.C., with a mission to support and educate local low-income single mothers, “win-win-win” might be more apt.

Maia Moms was founded in 2012 and recently launched a crowdfunding initiative aimed at generating seed money for what it calls a “Creative Flow Reuse Center” that would keep material out of landfills, engage local artists in working with these materials to create art, and offer workshops to the community, with the resulting creations sold in a consignment shop, some proceeds of which would support Maia Moms. Everyone wins, including the Charleston County recycling department, which has endorsed the effort.

Maia Moms aims to raise $50,000 by April to get the project underway, and the organization is hopeful that some empty industrial site in North Charleston might eventually house the operation. Artists with the North Charleston Artist Guild have already pledged to volunteer at the center. In a news release, Maia Moms said, “We will be engaged in the business of collecting industrial and residential discards for creative reuse. The efforts of this Center will promote recycling, provide revenue for local artists and generate funds for the nonprofit.”

Interestingly, the crowdfunding effort is hosted on the website of the South Carolina Small Business Chamber of Commerce, which supports crowdfunding campaigns for small businesses and for nonprofits. The Columbia-based Chamber’s president and CEO, Frank Knapp, Jr., applauded the Maia Moms approach to building a sustainable business model.

Creative reuse—sometimes called “upcycling”—has been around for decades, but has been gaining traction across the U.S. in recent years, with artists and arts organizations often leading the charge. In Philadelphia, for example, the Resource Exchange was founded by a theater artist in 2009 to reduce the considerable quantity of built sets and furniture from local film, television, and stage productions that were ending up in landfills. The organization also recycles smaller items, many of which go back into the creative sector, although the center (currently in the process of moving to its third location in five years to accommodate its rapid growth) is also open to the public.

Lancaster Creative Reuse has compiled a directory of similar models, including more than 120 U.S. creative reuse organizations and more than a dozen in other countries. Many exist specifically to provide materials for use in schools, like Trash for Teaching in Los Angeles. Most in the U.S. appear to be independent nonprofit organizations, although some hybrids are in the mix, too: Materials for the Arts (MFTA) in Long Island is operated by the New York City Department of Cultural Affairs with additional support from the City’s Departments of Sanitation and of Education, in collaboration with Friends of MFTA, a “nonprofit strategic partner.” Sounds like a “win-win-win-win.”—Eileen Cunniffe